UPDATE: The University of Utah has announced that it no longer will purchase animals from North Utah Valley Animal Shelter or any other shelter for experiments!

If the folks at the North Utah Valley Animal Shelter (NUVAS) were hoping to quietly continue betraying the animals in their care, they’ve just had their bubble burst. The  billboard that we’ve placed on the interstate less than a half-mile from NUVAS says it all. 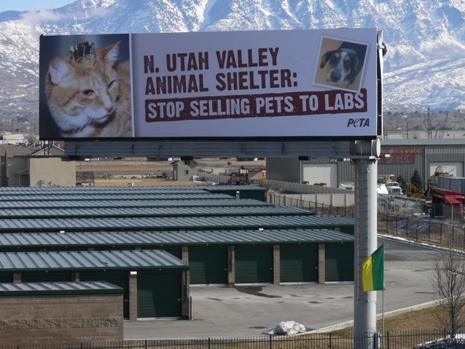 Utah County residents who don’t happen to drive this stretch of highway won’t miss the message. We’re taking it to their front door—literally—in the form of a door hanger with photos of some of the dogs who should have found a haven at the shelter but were instead sold like pieces of laboratory equipment. Anyone who lives in the area is welcome to help distribute the door hangers.

NUVAS has no excuse. Following a PETA investigation of the University of Utah (the U), Utah legislators amended state law so that animal shelters would not be required to sell animals to laboratories. NUVAS is the only shelter in the state that still engages in this shameful practice. Shelter dogs recently purchased by the U are currently being used in an experiment in which their chests and necks are cut open and pacemakers are implanted in their hearts to induce an irregular heartbeat. All 45 dogs used in this experiment will be killed and have their hearts cut out and dissected.

You can help by sending an e-mail to Utah County officials urging them to force NUVAS to end this unethical and outdated practice.