The Father of the Year Awards aren’t until May, but Rep. Paul Ryan needn’t hold his breath: PETA has just named Ryan our Bad Dad of 2012, and we’re sending him a certificate of dishonor: 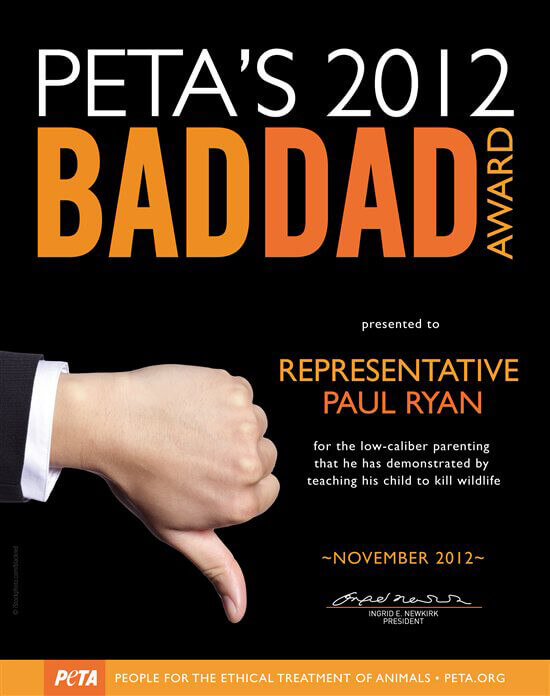 Ryan is catching heat for having his 10-year-old daughter pack heat and gun down a deer who was posing a huge threat to the duo by grazing in the woods, unarmed. Instead of spending the Thanksgiving holiday encouraging his child to appreciate nature and be kind to animals who haven’t a chance against fancy, high-powered weapons, Ryan was teaching her that killing is terrific stuff. If Ryan’s goal was to bond with his daughter, perhaps he should have considered that all animals love their offspring—including deer, whose fawns are sometimes orphaned and left to starve when hunters shoot their parents.

The Congress member’s lesson in violence saw him beating out a mother who tied up her baby outside an off-track betting venue, a father who put a child on a motorcycle with a plastic bag over the toddler’s head instead of a helmet, and a guy who had his baby tattooed.

We have suggested plenty of helpful or at least harmless activities that Ryan and his children could engage in, such as canoeing, hiking, biking, bird watching, or even clearing the forest of hunters’ beer cans and other trash.