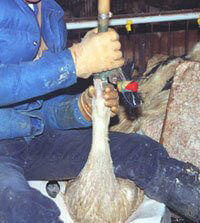 Thanks to all of you who wrote letters and made calls in support of California’s anti–foie gras bill, S.B. 1520, Gov. Arnold Schwarzenegger signed the bill into law on September 29, 2004. Among the activists who made this victory possible were California residents Pamela Anderson, Martin Sheen (who wrote a letter to members of the Assembly committee reviewing the bill), and Bea Arthur (who testified in support of the bill at a Senate hearing).

This compassionate measure, introduced by Sen. John Burton, set up a 7.5-year phase-out period after which the production and sale of foie gras would be completely banned. California is home to Sonoma Foie Gras, one of only two U.S. foie gras producers.

Foie gras is produced by force-feeding ducks or geese up to three times per day by prying open their bills, shoving long, inflexible pipes down their throats, and pumping several pounds of feed into each bird’s stomach. The process causes the birds’ livers to become diseased and to swell to up to 10 times their normal size. The enlarged, fatty livers are eventually sold as foie gras.

Because of the intense pressure of the force-feeding, some birds’ necks rip open and their internal organs rupture. Workers are often given monetary rewards just for not “bursting” birds. As a result of the stress and pain, the birds frequently become unable to walk and are reduced to propelling themselves by pushing with their wings.

Thank you again for all your efforts to help alleviate suffering for ducks and geese in California!