Like many of you, we were appalled by photos that have surfaced showing a visibly terrified monkey crudely strapped into a restraint device in which he was reportedly launched into space by the Iranian Space Agency (ISA). Back in 2011, our friends at PETA U.K. urged agency head Dr. Hamid Fazeli to ground the misguided mission, pointing out that nonhuman primates are no longer sent into space by the American or European space agencies. 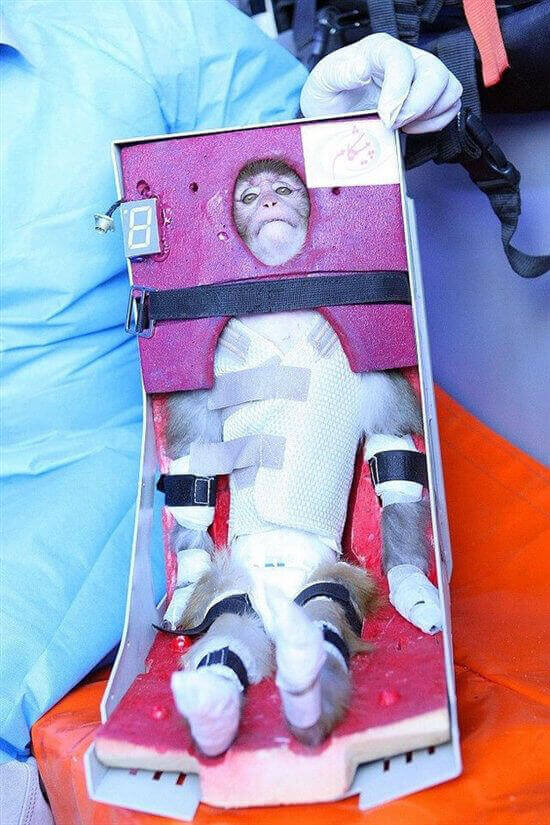 It appears that Iran is repeating the wasteful and cruel mistakes that marked the darkest days of the space race. Monkeys are smart and sensitive animals who not only are traumatized by the violence and noise of a launch and landing but also suffer when caged in a laboratory before and after a flight—if they survive.

NASA ended the use of primates in space radiation experiments in the early 1990s, following protests by PETA. In 2010, NASA’s plans to restart the program were canceled after PETA and others voiced strong ethical and scientific objections to the ill-advised plan.

Similarly, the European Space Agency (ESA) has a very active space exploration program and has publicly stated that it “declines any interest in monkey research and does not consider any need or use for such results.” The ESA instead employs modern technology such as state-of-the-art simulators to assess health risks for astronauts.

Whether it happens in Iran or Ireland, in an underground laboratory or in outer space, cruelly exploiting animals for specious science is indefensible. We’ve reached out to the ISA once again to ask it to stop shooting monkeys into space. Learn how you can help stop experimentation on all animals.