Captors abducted an orca named Lolita (whose given name is Sk’aliCh’elh-tenaut) when she was only about 4 years old. On August 8, she’ll have suffered in a tank at the Miami Seaquarium for 52 years. Imagine swimming in a bathtub, away from your home and loving family, for half a century. So Paulina Rubio, “The Queen of Latin Pop,” used her beautiful voice in another way today—to advocate for Lolita. She sent a passionate letter to Eduardo Albor, CEO of The Dolphin Company, which owns Miami Seaquarium, asking that Lolita get a second chance at life in a seaside sanctuary. 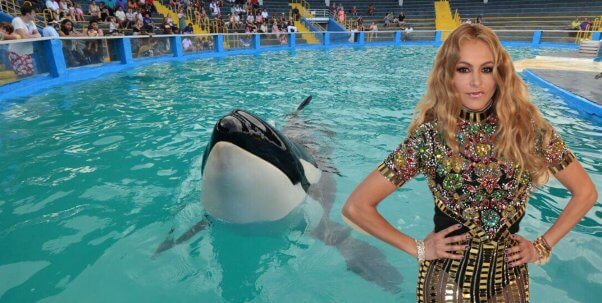 The urgent message from the singer comes after a whistleblower reported earlier this year that Lolita was gravely ill at the park. Although she managed to survive, she is unlikely to survive another illness. And according to a federal report from last year, the Seaquarium committed several animal care breaches, including by forcing Lolita to perform tricks that had likely hurt her jaw and frequently going against the advice of its own veterinarians.

The Show Must Not Go On

The Seaquarium forced Lolita to perform for decades. She was typically required to perform two or three times a day, and there were occasions when performances continued even when she could not keep her eyes open or had just undergone invasive procedures. As of this spring, Lolita is no longer forced to perform. Yet the long-suffering orca is still in the smallest orca tank in the world instead of a seaside sanctuary.

Lolita clearly doesn’t like her small enclosure. She exhibits signs of distress and frustration. Pattern swimming and rubbing against the sides of the tank—rubs on various body parts have been documented several hundred times by her trainers, including “all over her body”—are two examples of such behavior displayed by an animal deprived of everything that is natural and important to them.

That’s why Paulina Rubio, PETA, and many others are speaking out for Lolita, telling The Dolphin Company to let her live out her golden years in a better place.

“Please, don’t wait until it’s too late to give her the life she deserves. There is still time for Lolita to experience the ocean’s currents, swim greater distances and dive deeper, and live as an orca should, all while receiving food and veterinary care as part of the rehabilitation process.”

Protesters urged the Miami Seaquarium to release Lolita to a seaside sanctuary on the weekend marking her 51st year of being confined to the world’s smallest orca tank.

Use Your Voice for Lolita

Please politely urge The Dolphin Company to release Lolita to a seaside sanctuary.