On August 8, 1970, at 4 years old, I was violently torn away from my family and ocean home. My name is Lolita, and this is the story of my 52 years in captivity.

It took place in Washington’s Puget Sound. High-speed boats and big nets surrounded us. Dozens of my orca friends and family members were rounded up that day, too, and seven—including me—were later sold to marine parks. Five others drowned during the seizure, including four babies.

Half a century later, I’m the last surviving orca of those of us who were captured, but what I have is hardly a life—it’s more of an existence. You see, on September 14, 1970—roughly a month after my abduction—I was sent to the Miami Seaquarium and put into the world’s smallest orca tank. I’ve been here ever since.

During the past 52 years, things have gone from bad to worse. Before being captured, I was free to swim up to 140 miles each day and dive thousands of feet below the surface of my native waters—but here at the Miami Seaquarium, I can’t swim any meaningful distance. I can’t even seek adequate shelter from the scorching Florida sun—my concrete tank is completely exposed to the elements, so my skin has cracked and bled. And I’m so lonely—I haven’t seen another orca since my tankmate, Hugo, died after repeatedly ramming his head into a wall 40 years ago.

#Blackfish Hugo getting hoisted from the Miami SeaQuarium, 1980. He suffered an aneurysm from bashing his head >> pic.twitter.com/yJgLAYyZmb

Instead, the folks here at the Miami Seaquarium kept me confined to this abysmal tank with Pacific white-sided dolphins. They would scrape my skin with their teeth. Sometimes, my injuries were so severe that I think staff members medicate me with antibiotics to prevent infection. It’s not the dolphins’ fault—you’d think that marine park staff would recognize that we’re incompatible.

In early 2022, the Miami Seaquarium’s ownership changed and it agreed to stop forcing me to perform meaningless tricks for gawking tourists. But I’m still in the same tank where I float listlessly or swim in small, endless circles.

Marine mammal experts know that captivity has caused me extreme and unnecessary stress, torment, and injury—but according to my Miami Seaquarium handlers, all is well.

Sometimes I was forced to perform despite being unable to keep my eyes open—my handlers even made me do tricks after I’d recently undergone invasive procedures.

Apparently, my trainers’ idea of addressing my inability to engage in natural orca behavior is giving me a ball or a wetsuit for enrichment. If you’ve noticed me swimming in the same repetitive pattern or rubbing against the sides of my tank—both forms of abnormal repetitive behavior—now you know why.

I may have also gnawed on the concrete sides and metal gates of my enclosure, as my teeth have become permanently damaged. Marine mammal veterinarians recommend avoiding any deliberate cutting and drilling of the teeth to expose the pulp cavity, but that hasn’t stopped Miami Seaquarium staff from drilling into my sensitive teeth more than a dozen times.

Dental damage is just one of many ailments that I’ve endured as a result of captivity. I’ve also gotten infections and ulcers, for which I’ve been given antibiotics, antifungals, pain medication, steroids, hormones, and antacids. My Miami Seaquarium keepers have even given me drugs without any clinical evidence that they were needed, including an antacid to prepare for the busy tourist season. 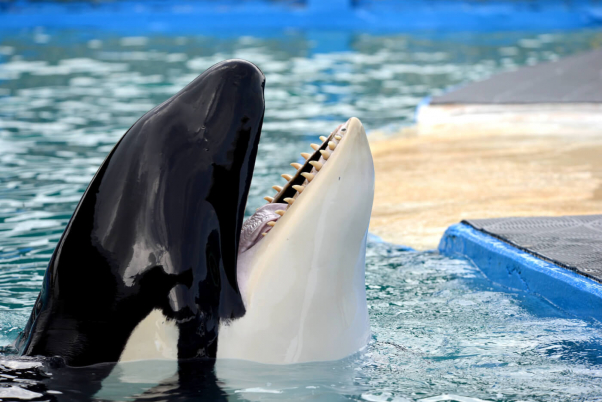 Don’t be fooled by what resembles a smile—at the Miami Seaquarium, Lolita has been living a nightmare for five decades.

Word in the tank is that there has been a global lockdown. I feel your pain—I’ve been in “lockdown” for 52 years. I’ve been socially distanced from my orca friends and family for decades. The stress of confinement can be terrible—it likely got to Hugo, and it’s nearly unbearable for me, too.

Was your lockdown temporary? I hope mine is, too.

Orcas in my pod, maybe even my mother, swim freely in the open ocean. There is a way for me to feel waves again, listen to the songs of my wild brethren, and finally have some semblance of a natural life: being released into a seaside sanctuary. 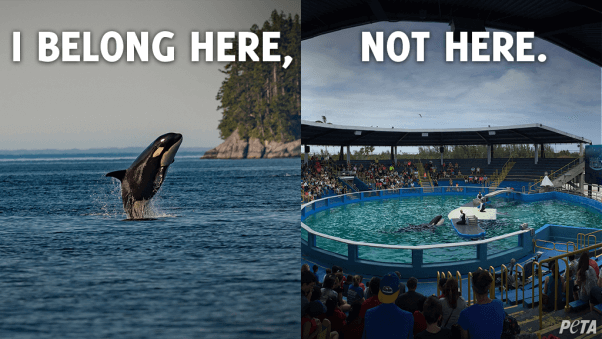 Urge The Dolphin Company to Retire Lolita to a Seaside Sanctuary