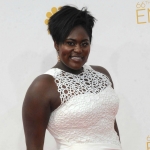 On the wildly popular show Orange Is the New Black, actor Danielle Brooks plays Tasha “Taystee” Jefferson. Arguably the soul of the show, Taystee is wise beyond her circumstances, taking on a leadership role among her group at prison and opting to watch educational shows and documentaries like Planet Earth. Was Brooks perhaps inspired by her character to watch the recent megahit What the Health?

Since What the Health and the heart-wrenching Okja were released earlier this year, Brooks hasn’t been the only celebrity to make the compassionate switch. Others who have gone vegan, crediting one—or both—of the Netflix films, include Kylie Jenner, Ne-Yo, and more than a few NFL players.

Celebrities aside, interest in going vegan has increased dramatically this year, and animals may have Netflix to thank.

Feeling inspired? Going vegan is easier than ever. Do your part for the environment, your health, and animals. It’s never too early (or late) to make the kind, smart choice to start your plant-based lifestyle, giving your health a boost and sparing animals suffering. It’s also never been easier to stop eating meat, eggs, and dairy “products”—there are countless compassionate options in grocery stores and restaurants across the country. PETA also has hundreds of free, delicious vegan recipes that you can try.