Update: Animals on organic farms can still be confined and subjected to immense cruelty and painful deaths. Thanks to one behind-the-scenes exposé after another, we’ve known all along that there’s no such thing as “humane meat”—despite what the U.S. Department of Agriculture (USDA) wants you to believe. On Friday, the federal government simply made this all official. According to The Washington Post, the administration’s new ruling means “that livestock deemed ‘USDA Organic’ need not be treated any more humanely than the animals in conventional farming.”

Trump administration weighs in for the first time on organic food. Should "organic" animals be treated more humanely? No, they say. https://t.co/KXQA0cD7P9

Just as the USDA’s rule regarding organic farms meant little to nothing for animals when it was issued in January—since the department doesn’t even have the authority to inspect farms for the mistreatment of animals—this new ruling doesn’t mean much for animal welfare, either. Meat, dairy “products,” and eggs can never be “humane.” Despite misleading labels that commodify animals, all sentient beings deserve to live free from exploitation. The only way to do right by them is to keep them off your plate.

Since they first appeared, “organic” labels have led customers to believe that certain products are “better.” But animals on typical organic and “free-range” farms often spend much of their time confined to crowded sheds or mud-filled pens, just as animals on conventional factory farms do. In the next few years, that will change … a bit.

The U.S. Department of Agriculture, which has no authority to inspect farms for the mistreatment of animals, just issued a new rule that will require farms that produce organic meat and eggs to abide by stricter animal-welfare standards. Starting next year, the rule will prohibit:

The rule also clarifies the requirement that animals must have enough room to stand up, lie down, turn around, and fully stretch their limbs. Birds on organic farms will now be given access to the outdoors, but the industry is required to give these naturally curious, intelligent animals only two square feet of space—hardly enough room for them to roam or express natural types of behavior. 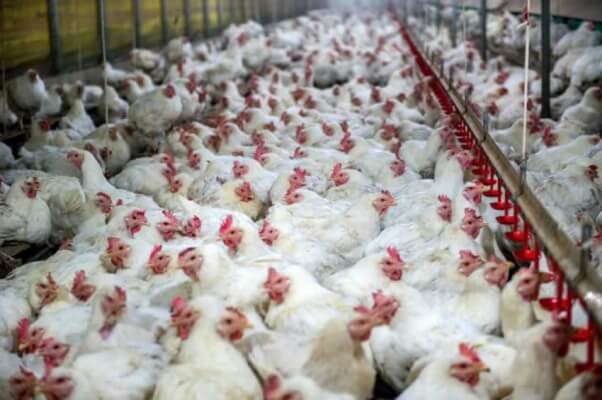 While this rule will provide some animals with a modicum of relief, the stark fact remains that animals on organic farms can still be intensively confined and subjected to forced impregnation, the loss of their babies, mutilation without pain relief, and a painful, terrifying death. There are no federal laws protecting animals on farms, and one behind-the-scenes exposé after another has revealed that even with some standards in place, animals suffer terribly. A PETA eyewitness investigation of a “humanely raised” pork supplier for Whole Foods found that sick and severely injured pigs were left for weeks without adequate veterinary care. The eyewitness also saw workers hitting pigs who were being loaded for slaughter.

These new regulations will do nothing more than mislead consumers into believing that animals on organic farms don’t suffer when used for meat, dairy products, and eggs— which couldn’t be further from the truth. These foods can never be “humane.” Go vegan and no one will have to suffer and die for your meal. Order your free vegan starter kit today.