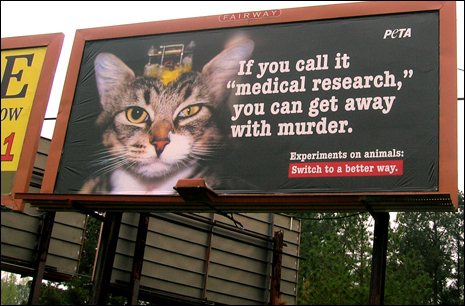 Just in time for World Week for Animals in Laboratories, PETA has unveiled a new nationwide ad campaign: “If you call it ‘medical research,’ you can get away with murder.” What happens in laboratories—including burning, poisoning, crippling, and blinding animals—would be considered criminal cruelty if it occurred elsewhere. But no experiment—no matter how painful—is prohibited by law. Publicly funded universities work hard to keep their cruel animal experiments a secret: Experimenters know that if people found out that their money was being used to torment and kill animals in crude, painful, and deadly tests, they wouldn’t stand for it. 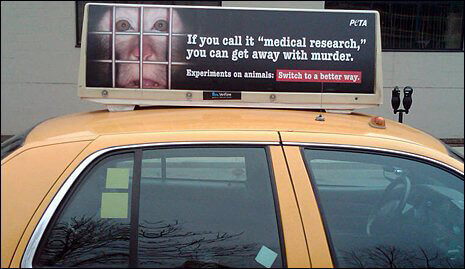 PETA’s ads, which show graphic, heartbreaking photos from our undercover investigations inside university laboratories, are up on billboards, taxis, and bus shelters and in university newspapers in Boston and in North Carolina’s Research Triangle Park. The ads will be appearing in other U.S. cities in the coming weeks.

While PETA is grabbing the public’s attention, you can help grab the attention of your representatives in Congress by asking that they divert public money away from experiments on animals in favor of humane, relevant, and lifesaving non-animal research.