PETA Executive Vice President Tracy Reiman, who’s also the mother of a child in the California public school system, has written to the administrator of the U.S. Department of Agriculture’s (USDA) Food and Nutrition Service asking that the service pull all beef and cow’s milk from school lunches after mad cow disease was discovered in an animal at a California rendering plant.

A group of parents who are “DAM MAD” (Dads Against Meat and Mothers Against Dairy) also converged on the Sacramento headquarters of the California Department of Food and Agriculture to urge it to protect children by pulling meat and dairy products from school lunches. 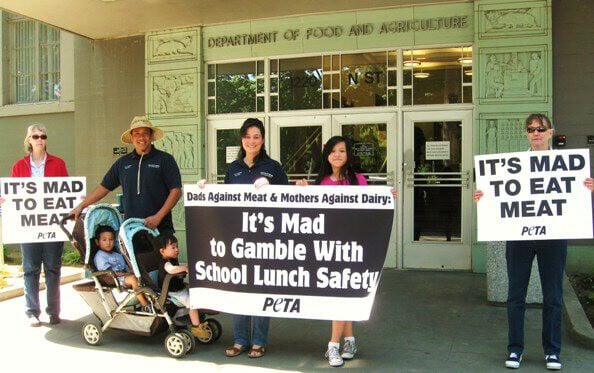 What’s truly mad is continuing to feed beef and cow’s milk to students, especially because “spent” cows, whose milk supply is exhausted by the dairy industry, are the primary concern when it comes to mad cow disease and are likely to end up as the kind of cheap ground beef that is fed to schoolchildren.

Given that the USDA has expanded its quarantine to a second dairy farm, that it still has not located the infected cow’s mother or siblings (who may also have the disease), and that it doesn’t even know what the California dairy industry is feeding its cows (because that’s considered a “trade secret”), the USDA must stop risking our children’s health and remove beef and cow’s milk from school cafeterias right away. 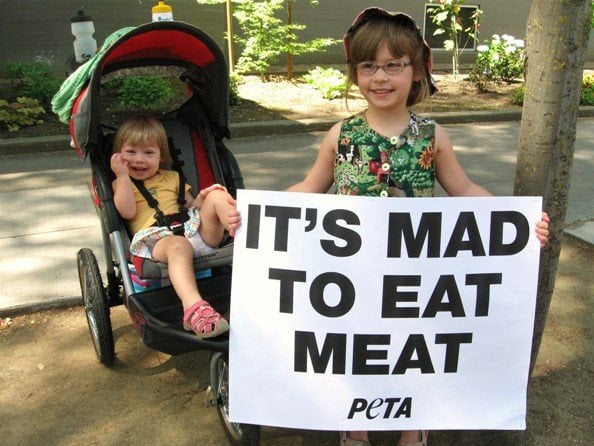 Tracy’s letter and the demonstration by the DAM MAD parents coincided with another PETA appeal to the USDA urging Secretary Tom Vilsack to correct misleading statements that he made regarding the detection of the disease—also known as bovine spongiform encephalopathy (BSE)—that created a false and dangerous sense of security by erroneously claiming that the nation’s human and animal food supply is safe.

In the letter to Vilsack, PETA points out that there is no way to know how many other animals are infected with mad cow disease because only a tiny fraction—about 0.1 percent of the nearly 34 million cows who are slaughtered every year—are tested for BSE. It’s also likely that milk from the cow who tested positive entered the food chain, and contrary to the USDA’s assurances about the safety of milk, studies have already shown that another form of the disease can be spread from mother to baby through milk.

How to Help Stop the Threat of Mad Cow Disease

Worried that tainted milk or meat may be on your child’s lunch tray? Don’t wait for the USDA to act. Protect your kids (and yourself) by packing healthy and humane vegan lunches—and keep it up at breakfast, dinner, and snacktime, too!