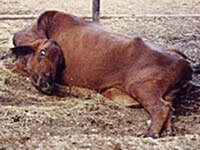 Mad cow disease is one of the most frightening diseases of our generation. Also known as “bovine spongiform encephalopathy,” this fatal disease, which causes the brain to degenerate until it becomes “spongy,” is caused by misshapen proteins called “prions.”

Researchers have traced massive outbreaks of the disease on factory farms to the meat industry’s cost-cutting practice of mixing the brain tissue of dead farmed animals into the feed of other farmed animals.

Any animal with a brain has the potential to become infected with prion disease and could pass the disease on to humans who eat the animal’s flesh. Scientists have already identified mad cow disease variants in humans, fish, sheep, minks, cows, deer, and cats.

Although illegal in Japan and Europe, it remains common in the United States and Canada to include the blood, bone, and unwanted flesh of all types of farmed animals in the feed of chickens, turkeys, and pigs. Of all the animal flesh and bone meal that is processed into food for farmed animals, almost half is fed to chickens and turkeys, 13 percent is fed to pigs, and 10 percent is fed to cows.

How Do People Get Mad Cow Disease?

When people eat infected animals, they can develop the human version of spongiform encephalopathy called “new variant Creutzfeldt-Jakob disease” (nvCJD). This disease eats holes in the brain (which results in a spongy appearance), initially causing memory loss and erratic behavior.

Over a period of months, victims gradually lose the ability to care for themselves or communicate, and they eventually die. There is evidence that a large number of Americans diagnosed with Alzheimer’s disease or dementia may in fact be victims of nvCJD.

Eating contaminated meat has caused more than 150 deaths worldwide. Thousands more are likely infected but do not know it yet, and it can take years for symptoms to develop.

What Is the U.S. Government Doing to Protect Americans From Mad Cow Disease?

The U.S. Department of Agriculture (USDA), which is supposed to ensure the safety of the American food supply, has a long, disturbing history of protecting the profits of the wealthy meat, dairy, and egg industries instead of protecting consumers and animals. But the agency’s actions on the mad cow issue may be the most appalling dereliction of duty to date. Here are a couple of examples:

By adopting a vegetarian diet, you can eliminate the risk of mad cow disease completely. Order your free vegetarian starter kit today!