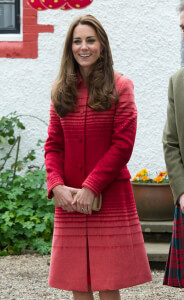 Not again! That’s what the Duchess of Cambridge must be thinking after being diagnosed for the second time with hyperemesis gravidarum, the severe morning sickness that she also experienced while she was pregnant with Prince George. While the duchess is not likely to be eager to eat much of anything (symptoms of hyperemesis gravidarum commonly last until the second trimester), PETA has sent her get-well wishes, along with information about the surprising link between animal products and morning sickness.

According to a study by scientists at Cornell University and the University of Colorado, there’s a reason why pregnant women suddenly get green in the face at the thought of former “comfort” foods such as meat loaf and chicken soup. Their bodies are naturally trying to expel meat and other foods that may contain “harmful toxins and micro-organisms that could potentially sicken the woman and damage her fetus just when its organs are developing and are most vulnerable to chemicals.”

While many women in traditional societies rarely eat meat—and do not suffer from morning sickness—women in cultures in which meat is consumed experience higher rates of nausea and vomiting during pregnancy. The study found that the most commonly reported aversions were toward meat and eggs—the foods that are most likely to carry harmful bacteria and parasites.

Former EastEnders actor Martine McCutcheon can vouch for that. She has said that she can no longer bear the smell or taste of meat after becoming pregnant, tweeting to her 85,000 Twitter followers the hashtags #goneoffmeat and #pregnant.

Morning folks! How are we all today? I'm going to meet my friend for brunch/lunch – I fancy a veggie fry up! #goneoffmeat #pregnant x

Going meat-free isn’t a cure-all—women suffering from hyperemesis gravidarum sometimes require hospitalization and IV fluids, but once Kate’s feeling a little more like herself, she might want to stick with healthy vegan foods. PETA has sent her the cheeky book Skinny Bitch: Bun in the Oven to help.