Victory: As a result of PETA’s campaign, the Army announced that it is ending its cruel use of monkeys in chemical attack training exercises and will instead use advanced human simulators!

On Monday, dozens of PETA members greeted the 32,000 attendees—who included Secretary of Defense Leon Panetta and Army Chief of Staff Ray Odierno—of the annual meeting of the Association of the United States Army (AUSA) in Washington, D.C. The protesters were there to urge the Army to stop poisoning primates in a cruel training exercise at Aberdeen Proving Ground. Many veterans and former military medical professionals have already joined PETA’s campaign, and the protesters received more encouragement from men and women in uniform attending the meeting. 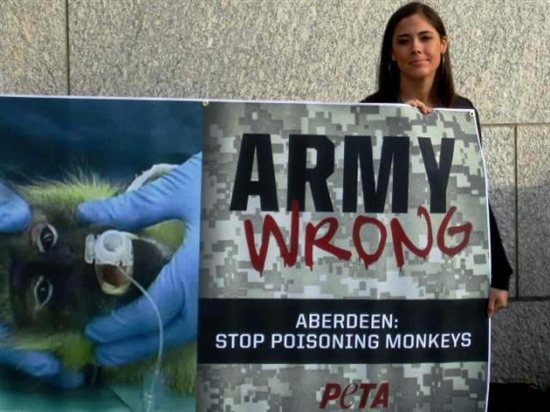 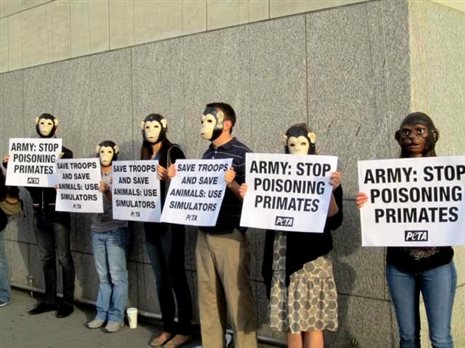 The Army’s exercises involve injecting vervet monkeys with a drug overdose in a crude attempt to recreate the effects of a nerve-agent attack. The monkeys suffer from uncontrollable twitching and seizures, and some even stop breathing. One monkey suffered gaping lacerations, a torn lip, and bitten- or torn-off fingers in fights with other monkeys caused by the stress of the constant physical abuse and confinement.

Other military courses already use human simulators, which can mimic the effects of nerve-agent exposure. Tell Congress to take action now to save monkeys and troops by replacing animals with advanced non-animal training methods.