It seems like Miley Cyrus’ actions for animals are never-ending. This week, she asked her fans to help get horses suffering in the horse-drawn carriage industry off New York’s streets, tweeting, “NYC is just 761 signatures shy of 100,000 petition goal to #FreeTheHorsesNYC! Sign @NYCLASS petition at StopHorseAbuse.com.” Miley’s fans’ signatures pushed the New Yorkers for Clean, Safe, and Livable Streets petition well above the 100,000 that the group needed. And Miley and her mother, Tish, gushed about their gratefulness to their Twitter followers.

Jason Mraz was likely grateful for all the help that he got from his Twitter followers, too. When he tweeted asking where to find the best vegan eats in Sydney, Australia, PETA and Jason’s fans were quick to respond with some yummy suggestions.

And Miley and Jason aren’t the only sexy stars whose tweets we’ve been eyeing this week: 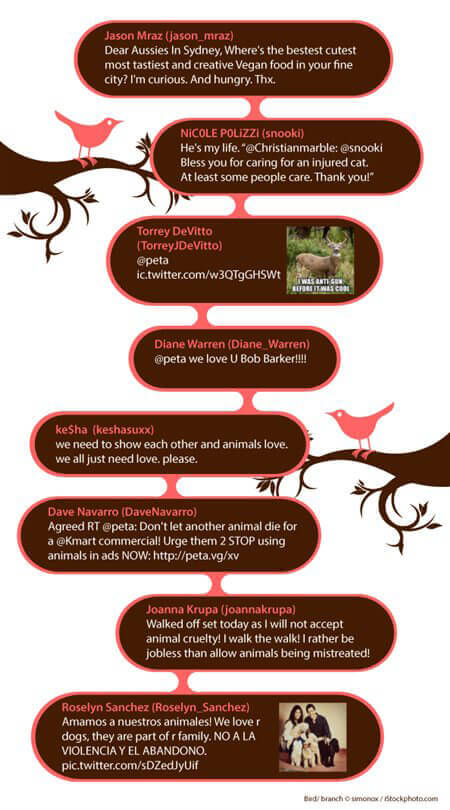 We also caught a glimpse of yet another sweet quote from one of our Sexiest Vegetarian Celebrity alums, Carrie Underwood. When The Guardian asked her about growing up on a cattle farm in Oklahoma, she answered, “The worst part of the year for me was when we took some off to sell, because they would cry for each other for a couple of days. That’s why I don’t eat meat.”

Ricki Lake has been inspired to embrace plants, too. She is reportedly enjoying more vegan meals after watching Forks Over Knives. PETA sent her some love in the form of a vegetarian/vegan starter kit, Alicia Silverstone’s book The Kind Diet, and our meat industry exposé “Glass Walls,” narrated by Paul McCartney.

Ricki’s timing couldn’t have been better, since this week marked Meatout 2013. Nikita‘s Maggie Q was in full celebration mode, encouraging all her Twitter followers to “[t]ry it!!!” 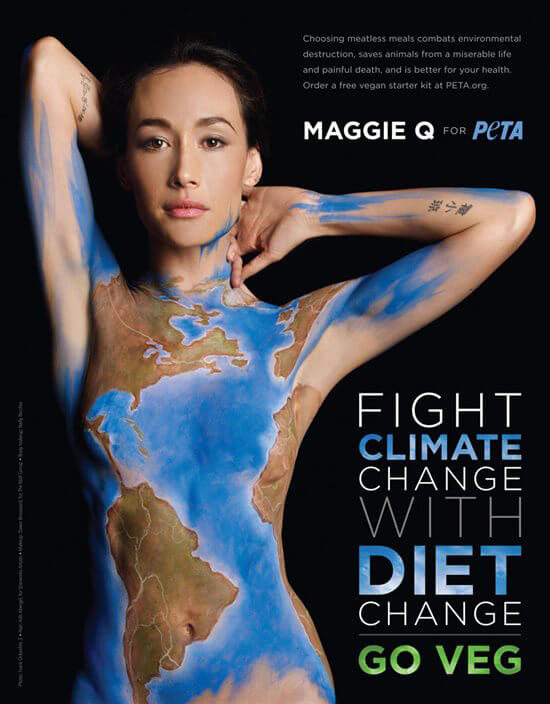 Sam Simon joined in, challenging his friend, radio personality Bubba the Love Sponge, to watch “Glass Walls” and go vegan for one week. Sam asked PETA for help, so we sent “Lettuce Lady” Lindsay Rajt, associate director of campaigns, to Tampa, Florida, to help Bubba with the transition and to appear on his show all week to talk about it. Bubba says that he’s enjoying the challenge and has a newfound love for vegan biscuits with meat-free gravy and rice milk.

While the shock jock is warming up to faux food, Shania Twain’s faux fur is keeping her warm. Her new show in Las Vegas features “dazzling costumes,” including only faux fur, of course.

And while Shania makes her point to the card sharks, Kyle Chandler is helping those other sharks. Alongside his daughter, Sawyer, he attended Humane Lobby Day in Austin, Texas, in support of a proposed bill that would ban shark-finning.