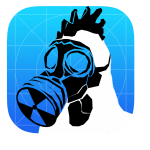 If you smell something foul near the meat department of your local supermarket, it might just be the “Scent of Death”—a chemical concoction that PETA has developed as part of our new “Meat Stinks” smartphone and tablet app.

Vegan kids who download the app and insert a special scent-releasing dongle into their phones’ headphone jacks will be armed and ready to educate their meat-eating parents during their next grocery store visit. When they reach the meat department and scan the barcode of a package of chicken parts, our “Meet Your Meat” slaughterhouse exposé begins playing. Kids can then simply push the “Meat Stinks” button to release a putrid odor—one that replicates a slaughterhouse’s stench of feces, blood, and decomposing flesh—to open their parents’ eyes (and noses) to the cruelty that chickens endure before they end up in grocery stores.

The app is being tested and perfected before we distribute it to a wider audience. Watch as this peta2 volunteer tests it out on an unsuspecting shopper:

As the app’s video reveals, chickens raised for food are crammed by the tens of thousands into filthy sheds and bred to grow so large so quickly that their legs often buckle and break under the weight. At the slaughterhouse, they’re hung upside down, their throats are slit, and they’re plunged into scalding-hot water in defeathering tanks—often while they’re still conscious.

Our “weapon of mass compassion” gives kids a way to combat this cruelty. After being confronted with the smell and sight of blood, ammonia, and rot, meat-buying parents will have a much harder time ignoring the suffering in every bite of chicken.