“I just think about these animals that are there for months …. And the way they kill them—it’s just not needed, it’s not a necessity,” said actor Mayte Garcia, speaking out against fur farms on the set of the new ad she shot for PETA. “Doing this shoot and getting into the cage and putting on the fur coat—it was overwhelming,” she added. But while being caged and drenched in blood isn’t anyone’s idea of a good time, Mayte is hopeful that her graphic ad will make people think twice about buying the skins of animals who, as the ad makes clear, were “electrocuted, stomped on, beaten, and skinned alive.” 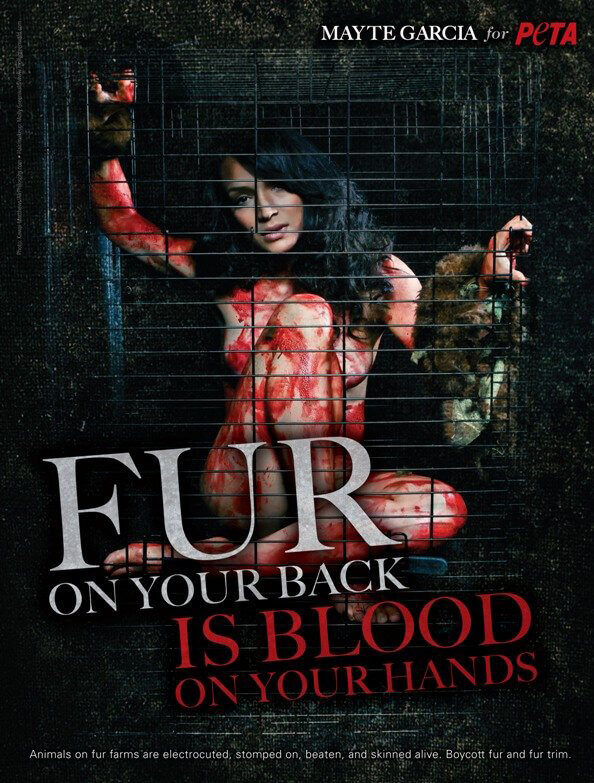 “[I]f I can educate one person to how these animals are treated, then I’ll do it again,” Mayte said on her reality show, VH1’s Hollywood Exes, which filmed her PETA shoot. (Mayte is the famous “Hollywood ex” of Prince.) In this behind-the-scenes video, Mayte revealed the childhood experiences that made her want to speak up for animals and why she believes that everyone should adopt homeless animals instead of buying from breeders and pet stores, spay and neuter their animals, go vegetarian, and, of course, refuse to wear real fur.

Follow Mayte’s lead in standing up to the fur industry by joining the thousands of people who have already signed our Pledge to Be Fur-Free, and always speak out about the cruelty of fur.