PETA Files readers know that SeaWorld hurts animals, so PETA’s new website, SeaWorld of Hurt aims to return the favor, hurting the marine mammal prison by showing people that its parks are no fun for animals. 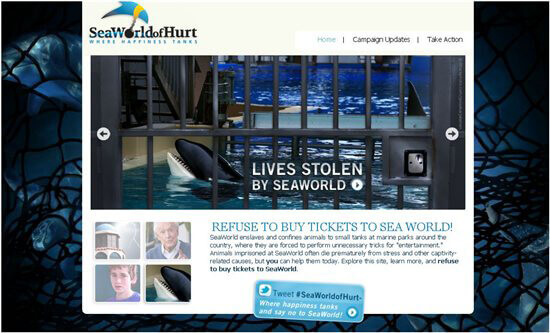 SeaWorld’s cruelty to animals was widely publicized during PETA’s landmark lawsuit in behalf of captive orcas, which broke legal ground and gave rise to the idea that all species deserve protection from slavery. Our lead counsel, Jeff Kerr, recently presented PETA’s argument for the release of enslaved orcas at the Superpod conference on San Juan Island, a meeting of orca advocates scheduled to coincide with the annual gathering of the “J,” “K,” and “L” pods of the Southern Resident orca population.

Animal advocates discussed efforts to secure freedom for marine mammal prisoners, including PETA’s lawsuit on behalf of Lolita, an orca captured in 1970 who continues to languish in solitary confinement at the Miami Seaquarium, despite the fact that her pod has since been given protection under the Endangered Species Act.

Meanwhile, we’re moving the conversation from the courtroom to the chat room, aiming to educate would-be SeaWorld patrons and make the parks’ profits sink like a rock.

Join us! Ask the Blackstone Group—the company that owns SeaWorld—to release the orcas to ocean sanctuaries that can provide them with an environment that is closer to what nature intended, and post PETA’s action alert to your social-networking pages.