How many more ways do animals have to tell us that they aren’t ours to confine and use for our entertainment? This time, a man was killed by lions he kept in his “lion lodge” and profited from by selling “exclusive lion lectures, feedings and game drives for guests.”

A man was mauled to death by his own captive lions as he attempted to fix a broken fence in the enclosure at a game reserve in South Africa. https://t.co/iM1PmRuWYa

Leon van Biljon owned and operated the Mahala View Lion Lodge near Pretoria, South Africa. He offered guests accommodations within the lion camp as well as encounters with three lions held there named Rambo, Nakita, and Katryn. He was reportedly repairing a fence inside the lion enclosure when at least one of the animals attacked. Neighbors reportedly shot at the lions to try to help Biljon, but he died from his injuries. A local police spokesperson told CNN, “The animals have been put down.” 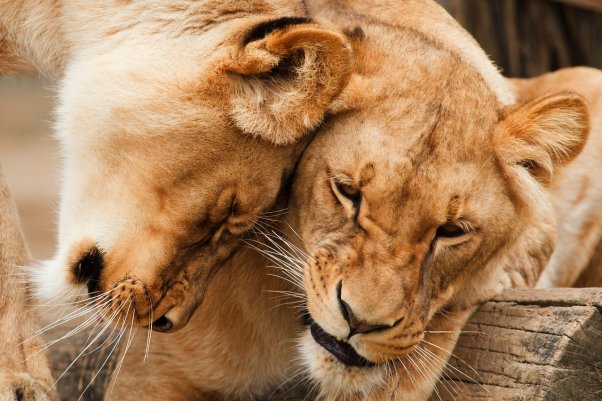 While Biljon’s death is tragic, of course, so is the fact that three lions who didn’t want to be held at the Mahala View Lion Lodge in the first place also lost their lives. PETA receives report after report of incidents in which captive animals and those used for entertainment lash out in anger and frustration. They’re usually either physically punished or killed.

But wildlife tourism is big business. People will pay top dollar to feed and take pictures with baby animals or “volunteer” with animals they’ve been told were “orphaned” or “rescued.” Generally, these animals are actually bred in deplorable conditions in captivity and taken from their mothers at an early age so that their captors can sell tourists on the idea that they’re “helping.” When the animals grow up, they’re frequently sold for canned hunting or their body parts are sold and used in ancient “remedies.”

Please don’t fuel this cycle of abuse. If a sanctuary isn’t accredited by the Global Federation of Animal Sanctuaries, don’t give it your money. You can also take action to help the animals in the entertainment industry who need it most: