An inspection of a captive-lion ranch that’s believed to be involved in the wildlife tourism industry has uncovered disturbing cruelty to animals. 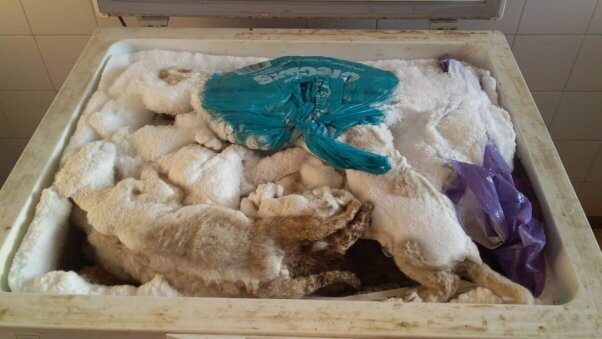 Rescuers at the scene took video footage, which shows two extremely ill lion cubs jerking and trembling in the cramped metal crate that they were locked inside. Their front and back legs were paralyzed. A veterinarian had to euthanize both cubs.

The surprise inspection followed a previous NSPCA visit to the facility in April, during which officials found lions, tigers, leopards, and caracals packed into filthy dirt lots without water or shelter. Inspectors said that more than 30 animals were crammed into a space big enough for only two. The inspection also revealed that 27 lions were suffering from mange so severe that they’d lost almost all their fur. 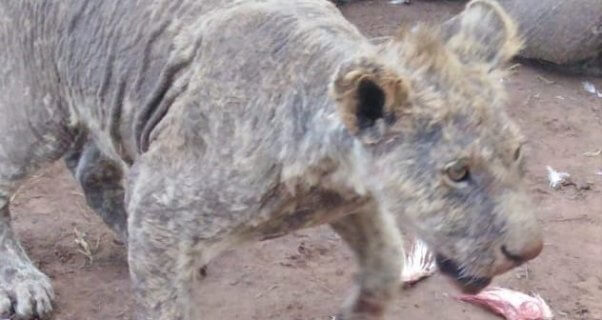 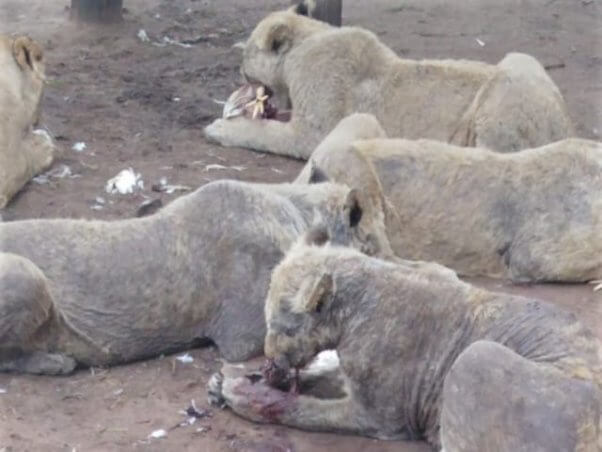 Four lion cubs at the facility were unable to walk. Dr. Peter Caldwell, who treated two of them, said that they had been taken from their mothers too early, suffered from malnutrition and weakened immune systems, and had contracted a meningoencephalitis infection of the brain and spinal cord.

An NSPCA spokesperson commented, “Where there is money and animals involved, there is bound to be cruelty.”

While the exact business model of this captive-animal ranch is unclear, the facility is believed to be involved in the wildlife tourism industry. Breeders produce litter after litter of big-cat cubs and take them from their mothers almost immediately to sell tourists the opportunity to feed “orphaned” cubs and take photos with them.

When the babies grow too big to be used for such purposes, they’re often sold to canned hunting ranches or their body parts are used in various “remedies.” The owner of Pienika Farm is reportedly part of a pro-hunting organization and is also believed to have been selling animal parts for alternative “medicines.”

Eduardo Goncalves, founder of the Campaign to Ban Trophy Hunting, told The Sun:

“There are around 60 such facilities in South Africa breeding big cats for people to pet, bottle feed, and then shoot for a trophy. The bones are often sold off to dodgy dealers in Asia who make fake medicines out of them. … The animals are kept in appalling conditions and their owners make a fortune out of their misery.”

And this isn’t happening only in South Africa. All over the world, cubs bred for petting, hand-feeding, and photo ops suffer a similar fate—or they’re relegated to decrepit roadside zoos, stuffed in cages and used as breeding machines, or killed outright when they grow up. 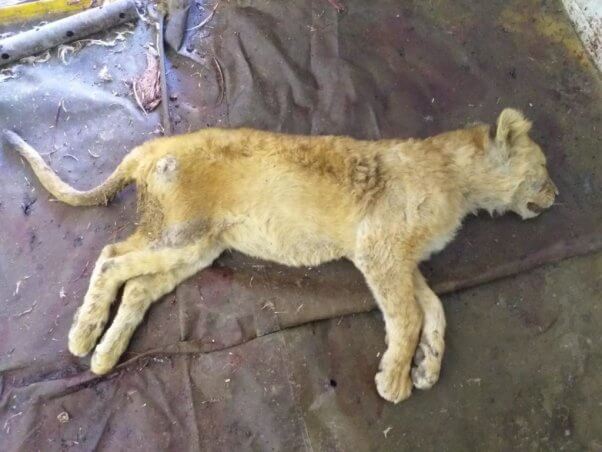 As people increasingly turn their backs on abusive captive-animal displays, exhibitors are tacking nice-sounding words such as “sanctuary,” “refuge,” “orphanage,” and “rescue” onto their names. But the use of those terms is unregulated, and they’re very often inaccurate.

True sanctuaries never separate mothers and babies or buy, sell, breed, exploit, or profit off animals. And they don’t subject naturally fearful animals to constant handling by humans, camera flashes, noise, and confusion. If a facility that you’re considering visiting isn’t accredited by the Global Federation of Animal Sanctuaries, you can bet that there’s probably a good reason why not.