This man’s cruelty revealed just how heartless the dog-racing industry is, as video footage shows the assailant viciously slamming a helpless dog to death. 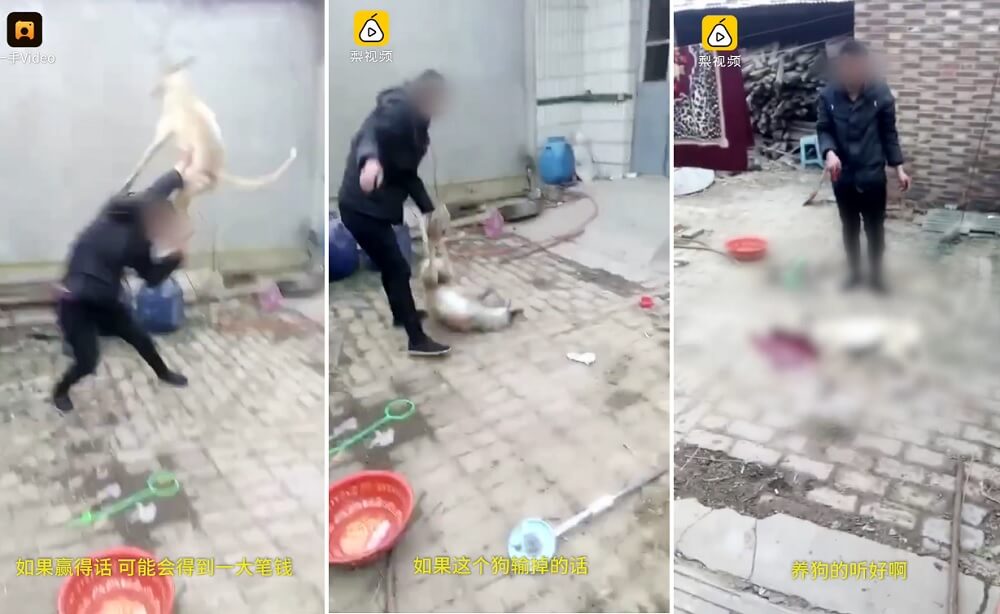 In a video uploaded to the Chinese site Pear Video, a man is seen throwing a greyhound against the concrete over and over again—each “thump” more haunting than the last. Eventually, the dog lies lifeless in a pool of blood.

According to reports, the incident happened in Xiong County of Hebei Province, China. Apparently, the man became infuriated with the dog after buying him or her for a high price and then losing a large sum of money he bet on the dog in a race.

While standing over the blood-spattered, decimated dog, he exclaimed, “Listen up, dog owners. If your dog is not … a good fit, eat it.”

The video has gone viral in China, and although viewers have expressed their moral outrage, the country has few laws to protect animals like dogs and cats from abuse.

On or off the track, life is hell for these dogs.

On average, a greyhound used for racing dies every three days, and countless others die each year before they ever touch a racetrack.

Since 2008, nearly 12,000 greyhound injuries have been documented in the U.S., including heart attacks, heatstroke, electrocution, fractured skulls, broken necks, and more than 3,000 broken legs. The actual number of injuries is undoubtedly higher.

This is wrong on so many levels. At least 12 greyhounds used for racing in Florida have tested positive for cocaine. https://t.co/ck62PMcA8Z

Although they’re extremely sensitive to the cold and heat, greyhounds are forced to race in extreme conditions—ranging from subzero temperatures to sweltering heat of more than 100 degrees. But their time at “home” isn’t any better. These exploited dogs may spend up to 20 hours a day in cages and are kept constantly muzzled. Many of them have crate and muzzle sores and suffer from infestations of internal and external parasites.

There’s typically no retirement plan for these greyhounds.

Most of these decimated animals don’t make it to the nominal “retirement” age of 4 or 5 years old—but even if they do, life after racing is just as horrific.

In one appalling example of the industry’s cruelty, in 2002, the remains of approximately 3,000 greyhounds from Florida racetracks were discovered on the Alabama property of a former racetrack security guard who had been “retiring” unwanted greyhounds with a .22-caliber rifle for more than 40 years.

In 2017, PETA obtained photographs and video footage of approximately 150 greyhounds—most if not all of whom were bred for racing—suffering in squalid conditions at a Texas kennel doing business as The Pet Blood Bank, Inc. Dogs there were found with open wounds, rotting teeth, and severely overgrown toenails. Some cowered at the sight of humans. Thankfully, with the help of our supporters, we got this nightmare factory shut down—and now, the National Greyhound Association bars its members from sending greyhounds to any blood bank operation that hasn’t been verified by the organization.

Like greyhounds who are exploited and abused for racing, dogs used for sled-racing experience unfathomable neglect and violence—and are run to (and sometimes over) the brink of death.

More and more people now agree that animals shouldn’t be forced to participate in a “sport” that doesn’t benefit them in any way. Stand with PETA as we work to end the exploitation of dogs in the racing industry.

I Want to Help Save Dogs Abused for Racing