The jury in the latest lawsuit against Smithfield Foods—the world’s largest pork producer—over the waste generated by its subsidiary’s North Carolina farms has just awarded an unprecedented $473.5 million to the plaintiffs. PETA is throwing in a little something that could prolong their lives, in addition to sparing a lot of pigs: gift baskets of bacon-flavored vegan jerky, sham ham, barbecue soy cracklins, and vegan cookbooks. We sent these to the plaintiffs—six neighbors of the industrial-scale hog farms—in an effort to keep them from patronizing animal factory prisons like the one that was compromising their quality of life.

The baskets include a note encouraging the recipients to combat farm waste and cruelty to animals in a very personal way: by leaving pigs and other animals off their plates. Every day on farms across the country, the tails of pigs are chopped off, their teeth are cut with pliers, and males are castrated—all without painkillers. And that’s before they face the horrors of the slaughterhouse. This unethical abuse will continue as long as people buy pork, bacon, and ham. 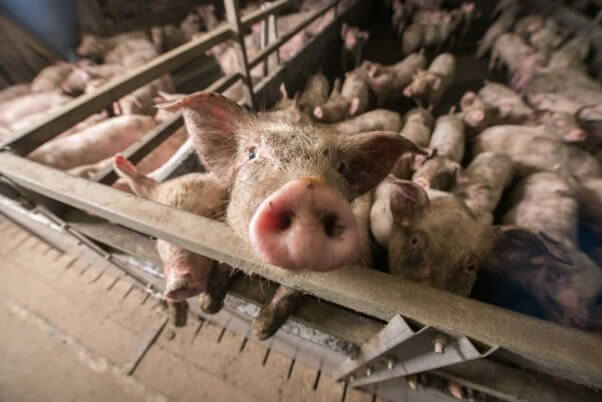 Lawyers argued that Smithfield has neglected to take measures that would minimize nuisances, including by failing to cover open pits of liquefied pig waste. Animals raised for food in the U.S. produce a collective 500 million tons of manure each year, which contaminates groundwater with bacteria, parasites, and viruses and is one of the leading causes of river and lake pollution. A report by the United Nations concluded that a global switch to vegan eating is vital to combat the worst effects of climate change.

Eating meat not only kills animals but also ruins human health and destroys the environment.

Order your free vegan starter kit and do your part to start saving animals and the planet today!