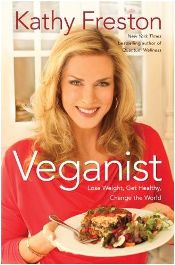 Vegan health and wellness expert Kathy Freston—author of the soon-to-be-released book Veganist: Lose Weight, Get Healthy, Change the World—isn’t shy about recommending a vegan diet to everyone she meets. She’s appeared on Ellen, The View, Good Morning America, and many other shows to give people advice on following a healthful and delicious diet. She even convinced Oprah Winfrey to try her 21-day vegan cleanse.

So it comes as no surprise that after the “impossibly glamorous” New York Times best-selling author sat down for lunch at New York City vegan hot spot Candle 79 with a meat-and-potatoes-loving reporter from Vanity Fair, he went vegetarian! Although the reporter initially turned up his nose at the seitan chimichurri and grilled-kale salad that Kathy recommended, once he actually tasted them, he declared them to be “delicious.”

In the article, which is featured in the February issue of Vanity Fair, Kathy explains that a meat-based diet “basically fertilizes cancer,” talks about the photo of a downed cow that started her on the path to vegan eating, and says that increased “public awareness of health issues and the environment” has led to an explosion in the popularity of vegan diets. We’ll eat to that!