The world just couldn’t get enough of the Netflix docuseries Tiger King: Murder, Mayhem and Madness. And while PETA would’ve liked to have seen the show focus more on the abuse that animals routinely endure at roadside zoos, the good news is that Tiger King has drawn global attention to this cruel, exploitative industry—and the public is on the tigers’ side.

When PETA learned of plans for a star-studded spinoff series about the life of Carole Baskin—an animal rights activist and the CEO of accredited wildlife sanctuary Big Cat Rescue—and Tiger King villain Joseph Maldonado-Passage (aka “Joe Exotic”), a big-cat exhibitor given a 21-year prison sentence for murder-for-hire and wildlife crimes, we sent urgent letters to actor Kate McKinnon as well as Universal Content Productions, urging them not to use real tigers in the show. They listened.

While we wouldn’t anticipate that a story about exotic-animal abuse would feature real tigers, who suffer when used for entertainment, PETA hoped to confirm that computer-generated imagery (CGI), animatronics, or even existing footage—instead of real big cats and other exotic animals—would be used for the show.

“After doing research, I learned more about her, and I respect and admire her and her mission, which is to end private cat ownership in the United States,” McKinnon said about Baskin.

Now, PETA is celebrating the fact that cutting-edge CGI was used in Joe vs. Carole to depict stunningly realistic tigers in this show about big-cat exploitation. 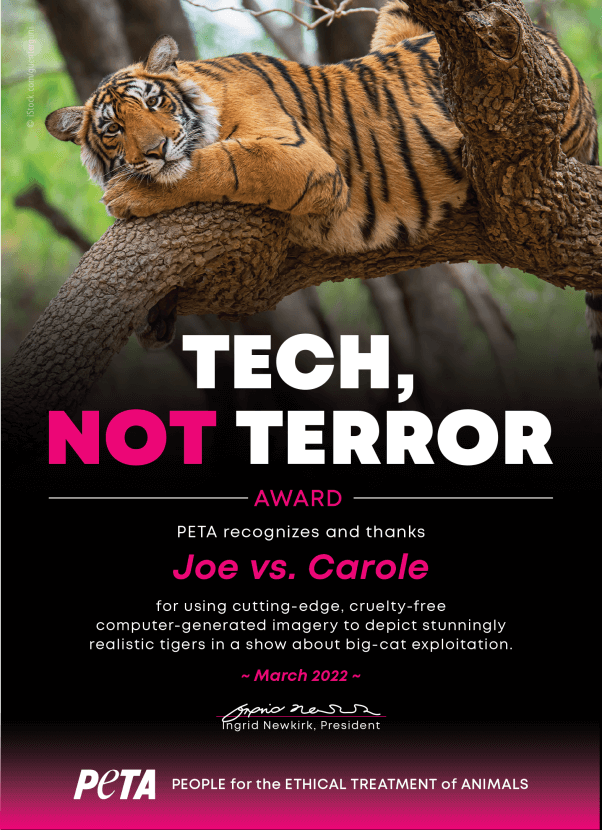 Exotic animals suffer when used for entertainment, whether by roadside zoo operators like those featured in Tiger King or by trainers for the film and TV industries. PETA and law-enforcement investigations have revealed that animals are whipped, illegally trafficked, and kept in deplorable conditions by animal suppliers for Hollywood.

Most wild animals do everything they can to avoid humans. They value their lives and would never intentionally put themselves in harm’s way. But those used by trainers are forced into close proximity with their captors and are typically deprived of their families, their freedom, and anything remotely natural or important to them.

#TigerKing’s Joe Exotic callously ABDUCTED baby tigers from their mothers just moments after they were born — putting them in danger of injury and death.

All the “quirky” things he did in the @Netflix show were just to distract from the animal abuse. https://t.co/MG6fb86DOx pic.twitter.com/g3GzUKlELk

Animals used in the entertainment industry are routinely separated from their mothers prematurely and denied the maternal care that they need for normal development, which can result in extreme physical and psychological distress. When no longer deemed “useful,” many animals used for film or TV are dumped at seedy roadside zoos, which is what was done to the chimpanzees seen in Tiger King.

Help other suffering animals who’ve been robbed of their dignity and forced to perform for human entertainment.

Animals aren’t actors, spectacles to imprison and gawk at, or circus clowns. Yet thousands of them are forced to perform meaningless, confusing tricks under the threat being whipped, beaten, poked, and prodded.

If you witness animals being used for a film or TV show, report it to PETA right away at PETA.org/Report or contact PETA’s whistleblower hotline at 323-210-2233.

Since Tiger King first aired, the use of big cats for photo ops has plummeted and nearly every abuser featured in the series has been locked up, gone out of business, or faced civil lawsuits or criminal charges.

Please urge your members of Congress to pass the Big Cat Public Safety Act, which would end private ownership of dangerous big cats, safeguarding both wild animals and communities across the U.S.: