Try saying it aloud: “An experimenter at Johns Hopkins University is holding barn owls captive in his laboratory, cutting into their skulls, poking electrodes around in their brains, and forcing them to watch dots on a screen—all so he can purportedly learn something about humans with attention-deficit/hyperactivity disorder.” Sounds absurd, right? Yet that’s exactly what experimenter Shreesh Mysore is doing in his torture chamber at Johns Hopkins University (JHU). 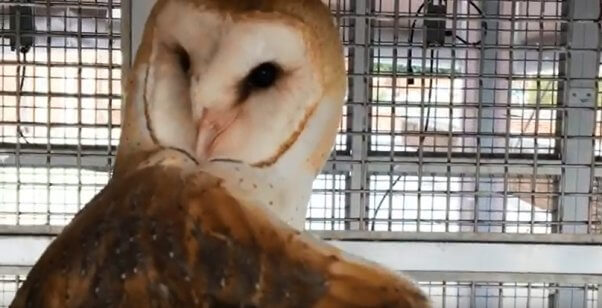 This owl is one of many imprisoned in Shreesh Mysore’s laboratory, where he cuts into their skulls and screws metal devices onto their heads in curiosity-driven experiments that are irrelevant to human health.

Barn owls are similar to humans in some ways—just like us, they surely don’t want to be tortured and killed for any reason, especially not so that some experimenter can pretend that he might eventually discover something about attention-deficit/hyperactivity disorder (ADHD) in humans. But for all our similarities, these birds are remarkably different from us. They’re nocturnal animals whose vision, hearing, and behavior are significantly different from ours. Their eyes are adapted to low-light conditions, for example, and their hearing is much more acute at certain frequencies. 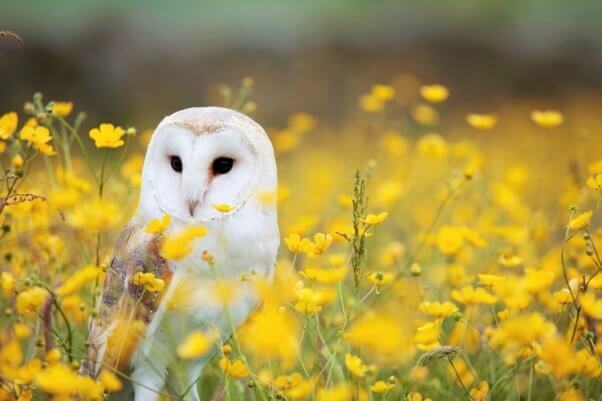 Barn owls generally live in structures such as water towers, church steeples, chimneys, and, of course, barns. But at JHU, they’re imprisoned in a laboratory and experiments are performed on them, like something out of A Clockwork Orange.

It’s no wonder, then, that although Mysore has spent years since 2013 torturing an estimated 10 to 12 owls per year, he has no information regarding ADHD in humans to show for it. Nevertheless, the National Eye Institute and JHU continue to throw millions of dollars at him so that he and others can keep tormenting birds and other animals. 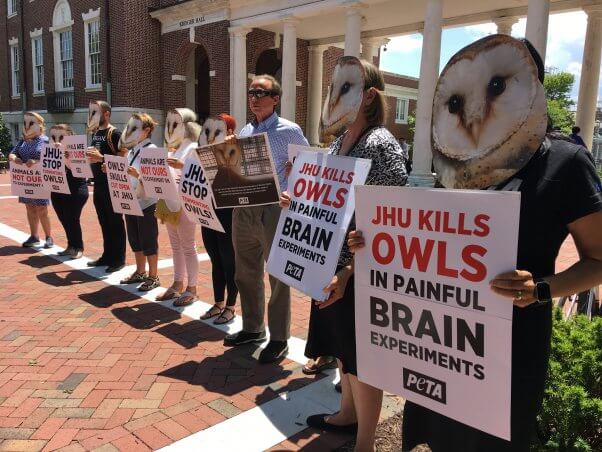 Wearing owl masks and blasting audio of screeching owls recorded inside a JHU laboratory, a group of PETA supporters gathered outside the office of university experimenter Shreesh Mysore and called for an end to his abuse of owls.

Clinical studies of humans have already told us much more about the way humans prioritize and modulate attention in the brain. We know that behavior therapy can be an effective form of treatment for children with ADHD. Sometimes doctors recommend a combination of behavior therapy and medication. We also know that eating healthy, being physically active, having a limited amount of screen time, and getting a good night’s sleep can make it easier for children to manage their ADHD symptoms. But Mysore’s deadly torture experiments on barn owls have contributed to none of this awareness—they have offered no insight into treating humans with ADHD and are irrelevant to human health.

What Is a Curiosity-Driven Experiment? 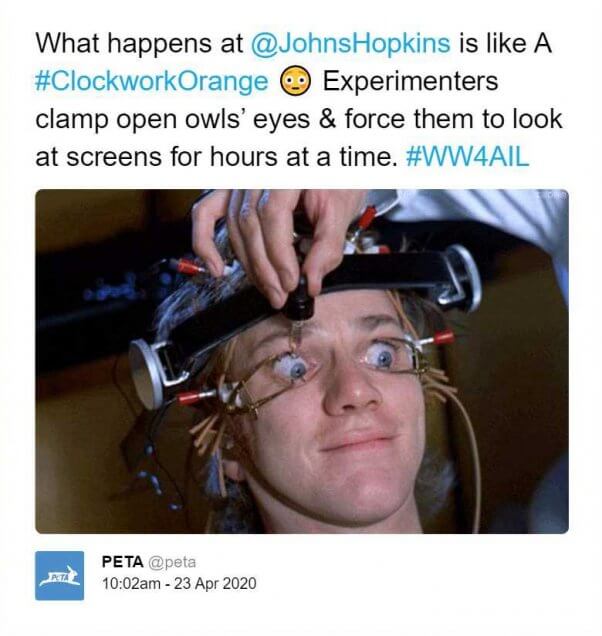 … and bombards the birds with lights and sounds for hours, all while poking electrodes around in their brains, mutilating their brain tissue so severely that they eventually become “unusable” to him. These experiments purport to seek information on ADHD in humans—by torturing, observing, and killing birds. Tormenting owls and pretending that doing so will tell us something about humans may have advanced this experimenter’s career, but the taxpayer-funded waste and the cruelty to animals can’t be excused.

Join us and more than 180,000 supporters in urging JHU to stop these cruel and useless experiments on owls on its campus, release the animals to a reputable sanctuary, and embrace modern, animal-free research methods that offer human patients real hope for cures and treatments.