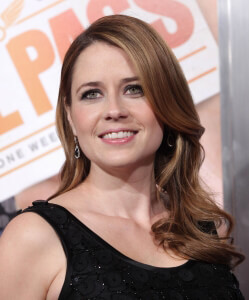 One of Jenna Fischer’s most poignant scenes in the hit comedy The Office was when she gave a eulogy for a bird who had died after flying into a glass door. Now, the compassionate actor is using her voice to help elephants. Fischer, an Indiana native, has written a letter on behalf of PETA to Indiana State Fair management urging the fair to do away with the cruel elephant rides that are being offered by Carson & Barnes Circus.

“Unlike me and others in the entertainment business, these animals do not choose to perform, and also unlike me, they suffer horribly in order to do so. I am hoping that you will make the kind decision to cancel the elephant rides immediately. I’m a mother of two. I love family-friendly events such as the fair, and I also appreciate having the opportunity to introduce my children to various animals. But as an animal advocate, I like to find the most responsible and humane ways for my kids to interact with animals—not only for the animals but also for my children so that they learn about kindness and compassion.”

Carson & Barnes Circus has more than 100 federal Animal Welfare Act violations. Last year, under oath, a citizen detailed a Carson & Barnes handler’s attack on an elephant. According to the eyewitness, the handler forcefully struck the elephant with a bullhook until the animal screamed. Carson & Barnes’ head trainer, Tim Frisco, was caught on video beating confused and terrified elephants.

If your state, local, or county fair offers elephant rides, appeal to fair management to eliminate them without delay.