He limped around in circles, desperately searching for a way to escape the heavy metal trap with steel jaws that cut into his paw and sent pain shooting through his body. A crowd of people was forming, pointing at the blood in the snow, graphic evidence of the potshots taken by passing hunters who had spotted the wolf from the road, his black fur an easy target against the white snow. The wolf struggled to stay on his feet, panting in agony and trying in vain to escape his tormenters. When the trapper arrived, instead of putting the anguished animal out of his misery, the man posed for proud, smiling pictures in the blood-drenched snow. He later bragged on a blog about how the wolf would make a nice trophy for his wall.

Cruel torture killings like this one have played out over and over in Idaho and Montana ever since grey wolves in the Northern Rockies lost the protection of the Endangered Species Act in 2011. In the past wolf-hunting season alone, 534 wolves were trapped, snared, and/or shot, cutting the estimated grey wolf population in the two states in half. 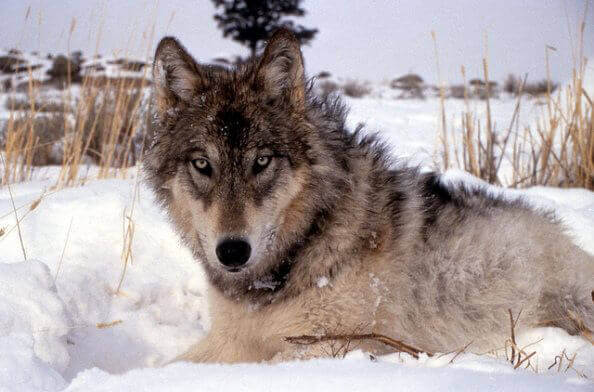 Despite vigorous opposition from PETA and ranchers, grey wolves were reintroduced into Yellowstone National Park in 1995. We predicted that as soon as the wolves’ numbers grew and they began preying on livestock and deer and elk (which the hunters want for themselves), the pressure would mount to exterminate them. Less than two decades later, that is happening.

Please, ask your congressional representatives to put wolves back on the endangered species list and save them from being tortured and killed by trappers and hunters.