In addition to watching vendors push the limits of the uses for a deep fryer, you’re going to see some interesting things when you visit the state fair. And this week, at the New York State Fair, visitors saw fully grown humans nursing on cows. 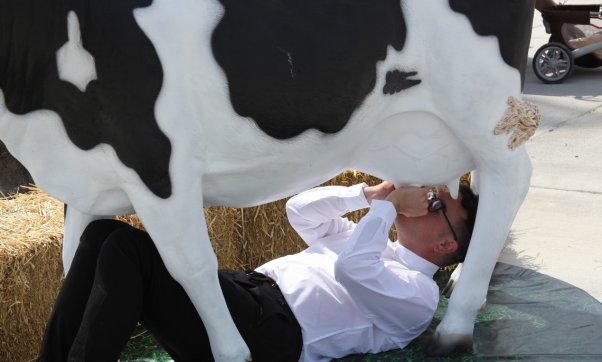 OK, so it’s just a statue of a cow, but still—weird. What’s even weirder? Humans who aren’t just pretending to drink a cow’s boob milk but are actually doing it. Listen, Focker, just because we can milk anyone with nipples—including Robert De Niro—doesn’t mean that we should. Furthermore, it’s one thing to milk a cat to feed her kitten. It’s entirely another to impregnate a cow forcibly, separate her from her calf, and then steal her milk for yourself. 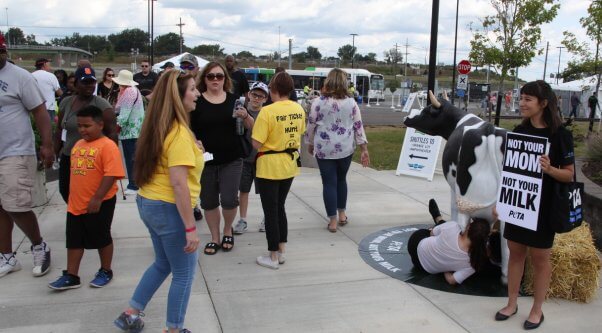 Cows, like all female mammals, produce milk only when they’re pregnant or have just given birth—and its purpose is to feed their own babies. Cow’s milk is specially formulated to suit the needs of calves, who, unlike humans, have four stomachs and are supposed to gain hundreds of pounds in a matter of months. It’s no wonder that 60 percent of adults can’t digest cow’s milk. And the other 40 percent should run away screaming as though someone were trying to get them to drink animal mammary gland secretions …. Oh, wait—that’s exactly what milk is. 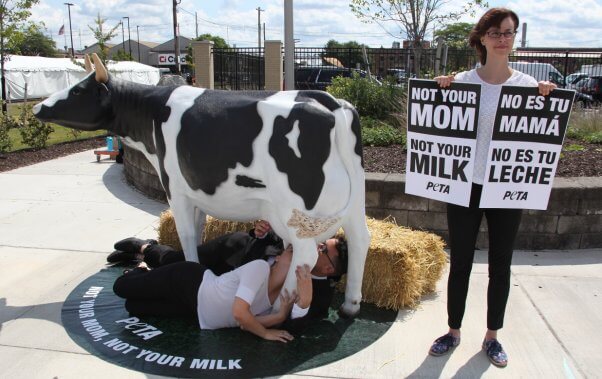 PETA’s wannabe baby bovines will be taking their cow-suckling antics to cities across the U.S. to remind people: Don’t be a boob. Let calves keep their milk.