The Hollywood Reporter has published a scathing investigation of the American Humane Association (AHA) that supports what PETA has been saying for years: AHA monitoring is woefully inadequate, and as a result, animals used in film and television are frequently put in dangerous situations, injured, or killed. Last year, PETA presented the AHA with a list of recommendations for making film and television productions safer for animals, but our suggestions were ignored, and we’ve heard that the situation for animals is only getting worse. 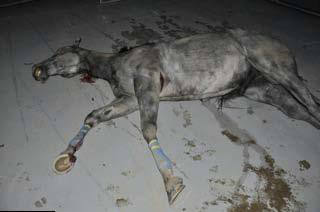 Following our release of behind-the-scenes information about how horses were being treated on the set of Luck, we received an unprecedented number of reports from whistleblowers on both TV and film sets, including animal trainers and some AHA representatives, alleging mistreatment of animals during production. It has been alleged that AHA management has looked the other way or even been complicit in arranging for the filming of sequences that were potentially dangerous for animals. The AHA has also reportedly ignored the concerns of animal trainers who, in the past, have relied on AHA representatives to take their concerns to production teams rather than raising objections themselves.

Now, the AHA is planning to stop monitoring many films and charge producers for the films that it does monitor, which is an even more direct conflict of interest. If this new policy goes into effect, the AHA will be even less likely to jeopardize its funding (it’s currently funded largely by the Screen Actors Guild) by speaking up for animals, and more animals will be put in dangerous situations, injured, or killed.

Wild animals used in entertainment are often subjected to abusive training methods such as beatings, electric shock, psychological torment, and food deprivation. Many are stolen from their mothers when they are just babies and forced to live their entire lives in extreme confinement. After they’re no longer profitable to their owners, they’re frequently discarded at seedy roadside zoos. Filmmakers need to know that the only way to protect animals is by leaving them out of their stories altogether or by relying on computer-generated imagery and animatronics.