Now here’s some real appointment television: On Earth Day—Monday, April 22—at 7 p.m. EDT (check your local listings for the time in your region), HBO will premiere the documentary An Apology to Elephants. Watch a preview here. 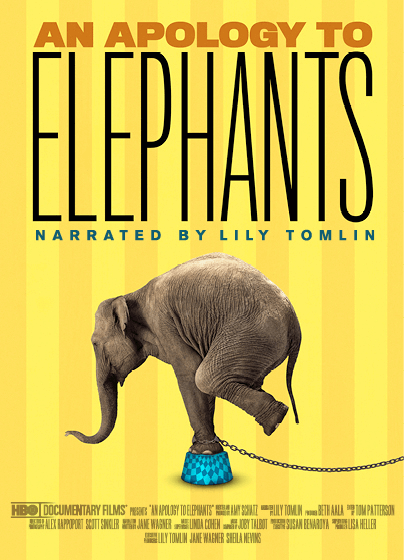 Getting the Word Out—and the Story Straight

In his review, David Wiegand of the San Francisco Chronicle says that Apology, narrated by Lily Tomlin, is “impossible to ignore because of the irrefutable arguments made by its savvy combination of testimony from animal experts and images of elephants being abused.”

Since HBO began working on this project more than two years ago, PETA has been on board offering information and documentation. The documentary features pictures and video footage provided by PETA, including photos from a whistleblower that document the shockingly cruel way in which Ringling Bros. circus breaks the spirit of baby elephants and video footage from a Ringling elephant walk showing bullhook abuse. Viewers will see elephants Maggie—who suffered alone for years at the Alaska Zoo before being sent to a sanctuary following a lengthy PETA campaign—and Nosey, in whose behalf PETA has been working for years.

Among the experts who participated in the documentary are Dr. Mel Richardson and Dr. Joyce Poole. Also appearing is passionate young animal advocate Rose McCoy, who once schooled McDonald’s execs over their failure to reduce the suffering of chickens.

Besides watching An Apology to Elephants yourself, encourage others to tune in, too—and tell them never to buy a ticket to any circus that uses animals.