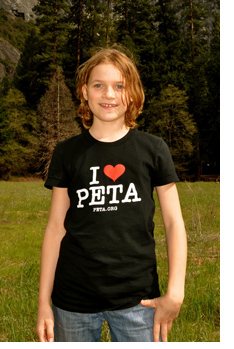 Most kids get butterflies in their stomachs when they have to read a book report aloud in class. This week, bright elementary student Rose McCoy spoke before hundreds of McDonald’s investors and executives at the company’s annual meeting. Armed with 20,000 of the nearly 125,000 signatures that PETA collected from young consumers, our superstar volunteer brilliantly made our shareholder resolution stand out in the room full of suits. She asked the fast-food behemoth to require its suppliers to switch to a less cruel method of slaughtering chickens.

“Controlled atmosphere killing,” already in use by McDonald’s European suppliers, prevents birds from having their throats cut while they are conscious and from being scalded to death in defeathering tanks. Rose, a lifelong vegan, told the shareholders, “Kids like me love animals, and we don’t want to see them suffer anymore for McNuggets. If McDonalds can spend a billion dollars to make its restaurants look pretty, then can’t it make this simple change?”

Please join Rose in asking McDonald’s to stop the worst abuses of chickens in its suppliers’ slaughterhouses.