Notorious experimenter Melinda Novak regarded people with cognitive disabilities as “morons, idiots, and imbeciles” whose “communication problems” were on par with “subhuman animals,” according to a published work uncovered by PETA.

Novak’s disdain for monkeys was even greater. Throughout her entire career, she conducted horrendously cruel experiments on monkeys, including tearing infants away from their mothers in maternal deprivation experiments. 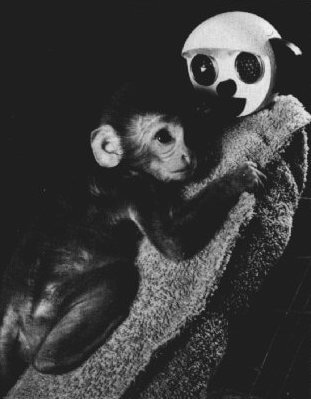 Just like human moms, monkey mothers love and adore their babies. But in laboratories like Harry Harlow’s (at the University of Wisconsin–Madison), mothers and babies alike were denied the chance to snuggle, eat together, enjoy the sunshine, or play.

After PETA sued to get 40 hours of never-before-seen video footage of the experiments on monkeys that Novak led, she told the Amherst Bulletin, “I have never, ever, ever in my entire life ever run a project to make animals have these behavior problems, then somehow study it.”

But the more than 100 papers that she published over 45 years show that this statement is demonstrably false. It’s even disproved in one of her very first publications, which plainly describes an experiment that she ran in which she put 6-month-old monkeys who were raised in partial solitary confinement in a device called the “terror trap” for 15 minutes a day for six weeks. The monkeys screamed and cried until they were “hoarse from the violence of their vocalization.”

Novak’s 1973 work “Psychopathological Perspectives” (co-authored with the godfather of monkey torture, Harry Harlow, and published in the journal Perspectives in Biology and Medicine) reads like the Rosetta Stone of monkey torment. It traces her deplorable career and lays the foundation for laboratory culture at national primate centers across the country that supported it—a culture that persists today.

The article makes quite plain the goal of Novak and Harlow’s cruel experiments at the time, which included ripping infant monkeys from their mothers and raising them in solitary confinement or giving them inanimate surrogate mothers, often made of metal. Simply put, they were designed to push monkeys to the mental breaking point and beyond “so that we know where simian insanity ends and human hopelessness begins and how and where they overlap,” the text says. 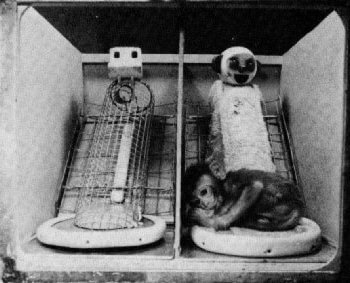 A baby monkey sucks their thumb while curled up next to an inanimate “surrogate mother” inside Melinda Novak and Harry Harlow’s laboratory of horrors.

Elsewhere in the article, Novak and Harlow callously disregard any intrinsic value of animal life. “Men are not monkeys and monkeys are not men. Neither men nor monkeys are dogs, cats, or rodents,” they write. The pair consistently refer to any nonhuman life as “subhuman animals.” According to their rulebook, this apparently means that tormenting and psychologically destroying animals is acceptable, as they wrote this:

Choosing from the myriad of mammals, the court of last resort for … research must, of course, be a court composed of men. It is to be hoped that those techniques which are ruinous will be lost before men become the subjects.

In other words, what these monkey experimenters did to primates was so horrible, they couldn’t contemplate doing the same to humans.

The text also describes in clinical terms how monkeys in laboratories were purposely isolated, causing them mental torment. “A simple and sure way of … eradicating the primate personality lies in the technique of total social isolation,” it says.

Monkeys are social animals. In nature, they live in groups in which intimate physical contact is critical for mediating social relationships and maintaining group stability. But as Novak and Harlow wrote, “[W]hen the gates of mercy and social meaning are closed and the animal is left to grow up in a confine devoid of the companionship of lingering loving forms,” there is “a true incarceration of both body and spirit.”

Some of these experiments, torturous as they were for the monkeys involved, “probably added nothing to the human literature,” Novak and Harlow admit in their text.

The contempt that Novak and Harlow show toward animals extends to humans with cognitive disabilities, too, as the experimenters wrote the following:

Diagnosis of human madness in terms of the classifications convenient for humans is difficult to make for human morons, idiots, and imbeciles. This does not mean that human imbeciles and idiots do not have human psychoses. They suffer from communication problems similar to subhuman animals.

Even for the 1970s, this language is shocking. Novak and Harlow’s research was founded on the belief that people with cognitive disabilities are morons, idiots, and imbeciles—a callousness that we’ve seen carried over into other laboratories and animal experimenters’ work for the last 50 years.

For example, Harlow’s ideas were used to create the facility now known as the Wisconsin Primate Laboratory Center. He and Novak wrote, “At the University of Wisconsin Primate Laboratory we have developed and are developing a family of behavioral techniques designed to produce psychopathology in monkeys, with the goal of gaining understanding and insight into human psychopathology, both its cause and cure” [emphasis added].

Speak Up for Monkeys in Laboratories

Experimenters at facilities all over the country have repeatedly shown that imprisonment in laboratories is so stressful that it drives monkeys mad, compromises their immune systems, and makes information garnered from experiments conducted on them virtually useless. Novak isn’t tormenting monkeys any more—she abruptly retired after PETA’s lawsuit was filed—but others such as Elisabeth Murray still are. Click below to demand that the government stop these experiments and immediately shut down Murray’s horrific laboratory, where monkeys’ heads are sawed open and a section of their skulls is carved out: