Update (August 4, 2022): The director of the Southwest National Primate Research Center—a place run so incompetently that it can’t even keep monkeys from being strangled by door cables, getting frostbite, or being burned by exposed pipes (details below)—has been caught by the National Institutes of Health (NIH) lying on grant applications and in published work on monkey torture.

What punishment will Deepak Kaushal suffer because of his sleazy behavior?

He gets to be “supervised” for one year. Gee, that must really hurt.

What he also gets is to keep his job and the tax money that NIH gave him to conduct those falsified experiments on monkeys.

Deepak Kaushal should be removed as director of the Southwest National Primate Research Center and barred from receiving publicly funded grants. He has betrayed the government, the scientific community, and taxpayers by falsifying and fabricating information on his grant application and in published work—all while he was infecting monkeys with tuberculosis and simian immunodeficiency virus. He is also a coauthor of the primate center’s much-touted Pfizer COVID-19 vaccine study. The monkeys he hurt and killed for his own aggrandizement and to gain well-paying positions of authority have no recourse, but the National Institutes of Health should require the return of all funds Kaushal received and should make sure he never gets his hands on another animal or taxpayer dollar.

Please take action below to urge your members of Congress to mandate that NIH stop throwing away taxpayer money on cruel, useless animal experiments like the ones Kaushal lied about and to instead focus on modern, non-animal methods of research.

PETA has uncovered documents revealing that during a winter storm in February, 159 baboons suffered from painful frostbite so severe that their fingers, toes, or tails had to be amputated. That amounts to an estimated 15% of the baboons held at the center who have been mutilated because of staff negligence. Beyond the agony of February’s frigid temperatures, missing fingers could harm the baboons’ mental states. As highly tactile primates, one of the few pleasures for these animals—who are routinely tormented in useless experiments—is exercising their ability to pluck blades of grass, manipulate food items, and engage in grooming.

We’re demanding that the U.S. Department of Agriculture investigate this egregious violation of the federal Animal Welfare Act (AWA), which is hardly a first for the SNPRC. Read about its sordid history of other AWA violations below, and then take action.

The Southwest National Primate Research Center (SNPRC) is one of seven so-called “flagship primate centers” established and funded by the National Institutes of Health (NIH) and one of the largest primate laboratories in the world. Located in San Antonio, the SNPRC is affiliated with Texas Biomedical Research Institute (Texas Biomed), which used 3,006 nonhuman primates—including macaques, baboons, and marmosets—in experiments in 2017. An undisclosed number of nonhuman primates were imprisoned at the facility for other purposes, including breeding. Despite a ban on federal funding for chimpanzee experiments that has been in place since 2011, the SNPRC also continues to warehouse 77 chimpanzees in its laboratory, even though the public, members of Congress, and experts like Dr. Jane Goodall have called for the retirement of these animals to sanctuaries. In 2018, Texas Biomed received more than $27 million from NIH, including a $7.9 million core grant to maintain the basic operations of the SNPRC. 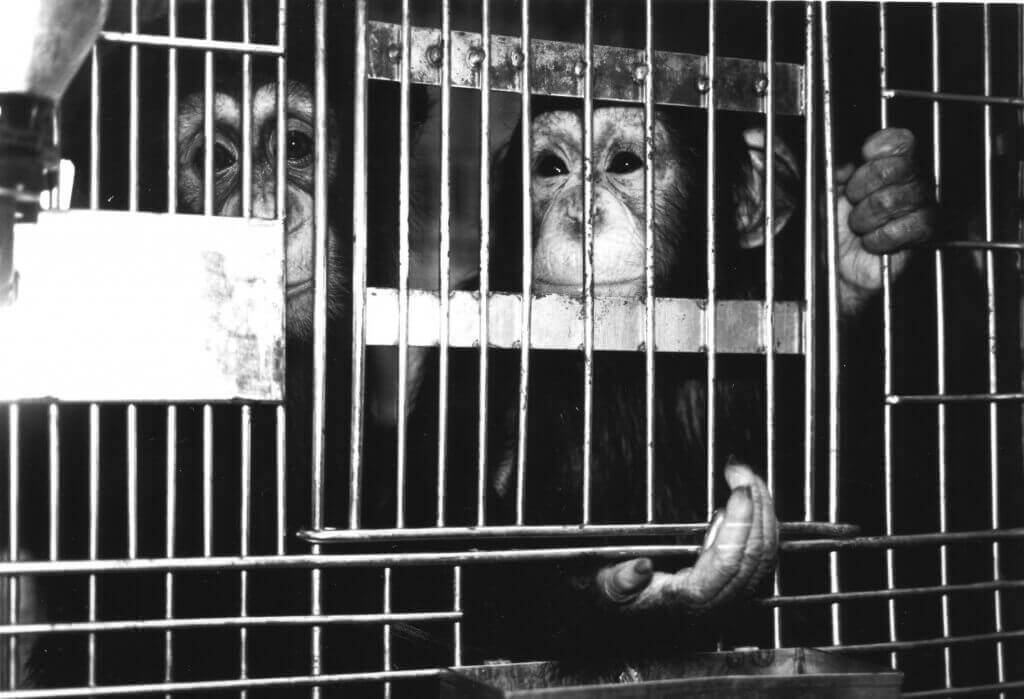 The SNPRC continues to warehouse dozens of chimpanzees, like these, in its laboratory, even though the public, members of Congress, and experts like Dr. Jane Goodall have called for the retirement of these animals to sanctuaries.

Experimenters at Texas Biomed intentionally infect monkeys with viruses such as HIV/SIV (simian immunodeficiency virus), hepatitis C, Ebola, dengue, and Marburg, which may cause them to suffer from acute weight loss, major organ failure, breathing problems, and neurological disorders before they die in excruciating pain or are killed. Monkeys are also regularly exposed to a variety of toxic substances, including anthrax. Experimenters at Texas Biomed have injected the neurotoxin MPTP into marmoset monkeys so that the animals develop symptoms that resemble Parkinson’s disease, including severe tremors, abnormal posture, lethargy, and difficulty eating.

Federal inspection reports reveal that Texas Biomed’s sloppiness and negligence have led to injury and death for monkeys at the SNPRC. In a recent incident, two macaques were seriously hurt after an employee failed to secure a latch properly on a divider separating them. A male baboon sustained second-degree burns to his hands and feet after coming into contact with an exposed heating pipe. In 2016, a male baboon lifted a chute door that should have been secured, attacked a female baboon, and killed her infant. In 2013 and 2014, a young baboon died after becoming emaciated and sustaining extensive bite wounds to his body, multiple monkeys died by strangulation when they became entangled in door cables—and no one noticed—and a baboon was killed when a guillotine door fell on him. In 2018, the facility made headlines when four baboons imprisoned there escaped by using a barrel—putting Texas Biomed’s own staff, the public, and the baboons at risk. 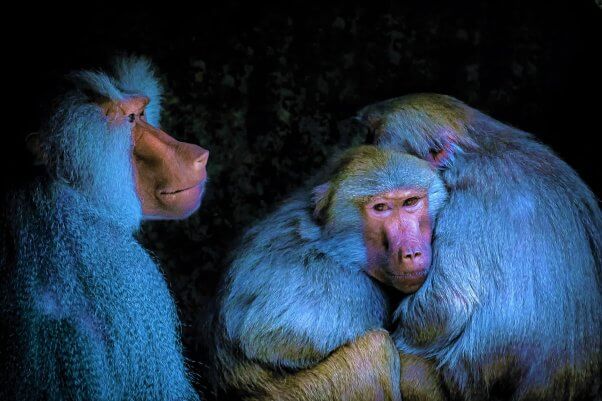 In 2011, the U.S. Department of Agriculture (USDA) fined Texas Biomed nearly $26,000 for repeatedly allowing primates to escape from their cages and injure themselves and others, including humans. This penalty follows PETA’s formal complaint regarding a 2010 incident in which two baboons escaped from their cages and attacked a caretaker—an incident that landed the laboratory, then known as the Southwest Foundation for Biomedical Research, two violations of the federal Animal Welfare Act, including for failing to handle or house animals safely. The fine also addressed a 2009 incident in which a young monkey escaped from a cage and got outside into the freezing cold. The animal suffered from severe hypothermia and had to be euthanized. Although this fine is “large” by the weak standards of federal animal-welfare enforcement, it’s minuscule by comparison with the many millions of dollars that Texas Biomed receives from the federal government every year to conduct cruel experiments on animals.

Texas Biomed is currently under investigation by the USDA for additional violations. 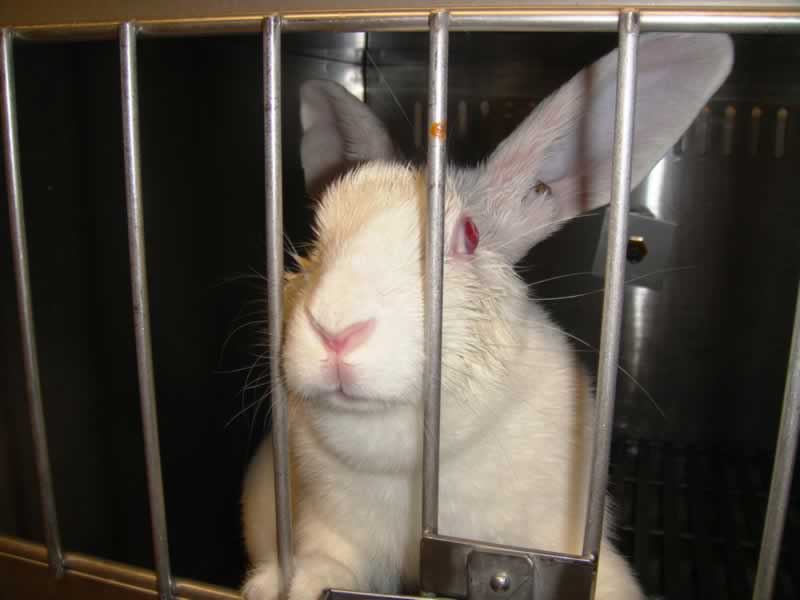 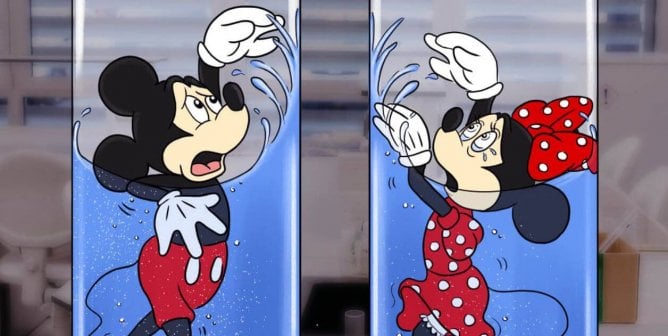 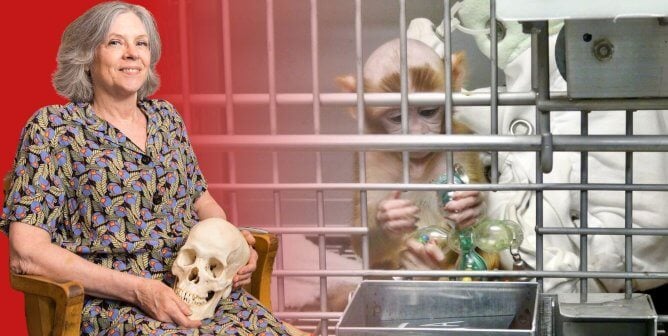