Imagine having your ears crudely hacked off and then being tossed outside to recover from your wounds as best you could without so much as an aspirin to dull the pain. That appears to be what happened to a pit bull puppy in Hampton, Virginia, and PETA is now desperately trying to find out who inflicted the wounds in order to bring the perpetrator to justice. 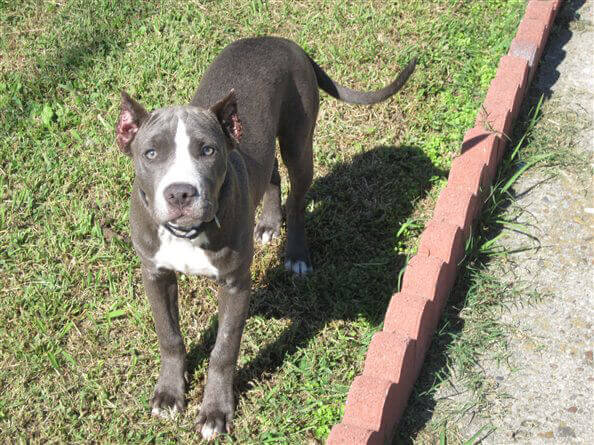 After a concerned passerby spotted the injured puppy in a yard without any shelter, her ears crusty, bloody, and obviously infected, the person contacted PETA, and we in turn contacted animal control. But so far, all we have been able to determine is that the puppy was apparently purchased from a local breeder, who we believe inflicted the injuries. The puppy’s owner was ordered to provide her with vet care but allegedly refuses to divulge the breeder’s name, so we are offering up to $1,000 for information leading to the arrest and conviction of whoever hacked off the puppy’s ears. 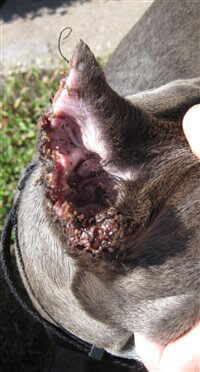 Home “crop jobs,” in which scissors, knives, and other sharp instruments are used to hack off pit bulls’ ears to make them look “tough,” are often associated with dogfighting. Such procedures are illegal both because they violate anti-cruelty laws and because they could be considered practicing veterinary medicine without a license. Even if performed by a veterinarian, ear-cropping and tail-docking are purely cosmetic (read: unnecessary) and cause extreme pain to the victims.

Cases like this one are not isolated incidents. Animal abusers are usually repeat offenders, and studies show that they often “progress” to committing violence against humans. If you live in the Hampton Roads, Virginia, area and have any information about this crime, please call PETA at 757-962-8370.