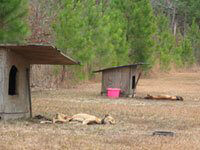 Julie Benz might play roles associated with violence, such as Rita on Dexter and the evil Darla on Buffy the Vampire Slayer and Angel, but in real life, she knows violence toward humans and other animals shouldn’t be taken lightly. That’s why she agreed to star in two PETA public service announcements (PSA), which encourage people to speak up if they witness violence toward any living being.

“Dexter is fictitious, but he’s based on a very real fact,” says Julie. “Many serial killers and other violent criminals start out by abusing animals, and often this cruel behavior is ignored—until it’s directed at humans.”

No form of abuse is ever acceptable. Research in psychology and criminology shows that people who commit acts of cruelty toward animals don’t stop there—many of them move on to commit violent acts against their fellow humans.

Take Julie’s advice. If you know of someone who has harmed an animal, report it to animal control or the police right away. Animals and people in your community are depending on you.