Earlier this year, I was driving along the crowded streets of Hyderabad in India, near one of the Mahatma Gandhi shrines, when I saw something I’d never seen before that almost flipped my lid. I was there to launch the Indian version of PETA’s kids’ book, 50 Awesome Things Kids Can Do to Save Animals, and I knew instantly that kids had to get involved in the atrocity that was unfolding right before my eyes.

It was a few days into the annual kite-flying contest, which Hyderabad is known for, and kitemakers were squatting at every curb, spinning colored kite string. However, the string was being coated in spun glass, much as you would coat a stick with cotton candy. This makes the string razor-sharp and able to rip through an opponent’s kite in a millisecond.

Errant kites, set free to entangle in phone poles and trees, rip birds to shreds. So I set off with Jayasimha, one of the great movers and shakers in PETA India, to a bird sanctuary where we watched the volunteers gearing up for the coming horror: a grueling three-day festival in which hundreds of vultures, parrots, crows, and other birds were going to be wounded, many of them fatally.

PETA India started a petition asking kids never to buy glass-coated string, called “Manja.” And here is the first demonstration against it in Hyderabad: 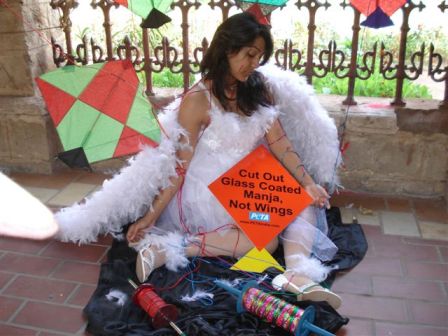