Mahatma Gandhi said, “The greatness of a nation and its moral progress can be judged by the way its animals are treated.” What, then, can we surmise about the U.S., where 59 billion animals a year suffer intensive confinement, are deprived of all that is natural to them, have their bodies mutilated by dehorning, castration, ear cropping, and more, all before they are killed for a fleeting taste of flesh? October 2, Gandhi’s birthday, marks World Farm Animals Day, a day to honor Gandhi’s advocacy of nonviolence and vegetarianism and to remember the animals killed for what he called “the satisfaction of our bodily wants.” 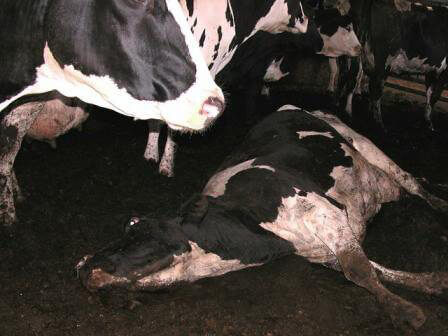 The plain facts are appalling: Every year in the U.S. alone, more than 7 billion chickens and 275 million turkeys have their legs slammed into shackles and their throats cut before being immersed—often while still conscious—in scalding water to remove their feathers. Many of the 118 million pigs killed annually are improperly stunned and scream in pain as they are scalded to death. More than 39 million cows are hung upside down and left to dangle with all their body weight suspended by one leg before their throats are cut and they are skinned and gutted, some aware of what is happening to them as their bodies are hacked apart.

If humanity is to make real moral progress, we must treat animals as sentient beings whose lives are their own and do not belong to us. This World Farm Animals Day, we’re trying to get 10,000 people to visit Meat.org and watch the site’s “Glass Walls” video. Please share the page on Facebook, on Twitter, and in any other way you that can imagine to get the word out there!