PETA’s Community Animal Project staffers’ days are filled with tending to “forgotten” dogs, animals who have been relegated to a chain or a cage in the backyard and left to live out their days in solitary confinement—a punishment reserved for society’s most dangerous criminals, yet these dogs have committed no crime. When our caseworkers find them, forgotten dogs are often suffering from the final stages of cancer, heartworm infestations, untreated infections, mange, hypothermia, or malnutrition. If you give a dog only the briefest of glances when you toss kibble in the bowl once a day, it’s all too easy to turn a blind eye when the dog deteriorates from simply being filthy to being gravely ill. 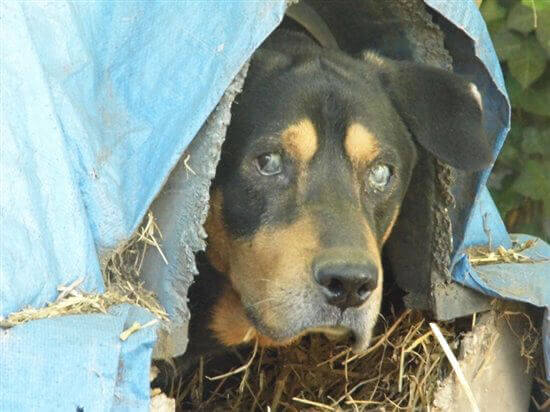 Recently, PETA President Ingrid E. Newkirk encountered one such dog, an elderly Rottweiler mix named Sam. She wrote about Sam in an essay that was posted on Ladies’ Home Journal‘s sister website, DivineCaroline.com:

He had been a puppy once, welcomed into a home, played with, made a fuss over. But there came a day, probably not long into his young life, when he became too messy, too much trouble, too big—he was a Rottweiler mix, after all—too bothersome, and that’s when he was put outside in the pen. That day was some 11 years ago. . . .

When I found him, he was lying curled up in his plastic box with the chewed sides and the bare floor, just as he must surely have spent most of every day and every night for all those years. There was not a scrap of bedding, even though it was 37 degrees out, with temperatures forecast to drop to below zero that night. The pen stank of feces, and I could see his waste among the leaves.

He had his back to me, so I called out to him and made loud kissing sounds, but it wasn’t until I whistled that he heard me, turned around, and slowly came out of the box, making his way to the gate. …

His coat was dull and dirty. His ears bore faint scars from the previous summer, when he could not escape the flies, who, drawn to his urine, incessantly nibbled at him. I put a big chew bone near him, and he stopped, sniffed, and bent his head to the ground, taking a while to find it. That’s when I realized that he had been navigating by smell and familiarity. He was blind.

Read Ingrid’s essay in its entirety at DivineCaroline.com.