We know that there weren’t any pigs on your table this Christmas, but were there pigs at it? At a festive Christmas party in Goa, India, not only were pigs at the table, they were also the guests of honor. 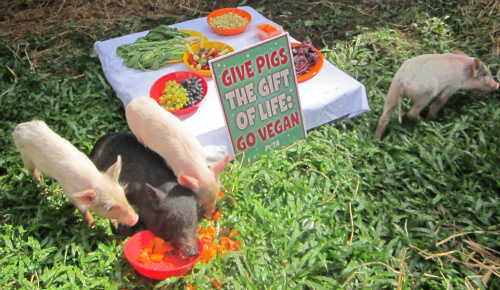 The Panjim Animal Welfare Society (PAWS) had intercepted a group of people who were illegally transporting about 100 pigs and who intended to slaughter and sell them for holiday meals. But PAWS rescued all the pigs and took them to safety at its shelter. So, since the pigs were no longer becoming the feast, PAWS and PETA India decided to throw them one instead.

The gleeful pigs happily munched on corn, spinach, strawberries, grapes, and other treats, while their proud rescuers doted on them. And as news cameras caught the pigs’ mirthful antics, they also captured the not-so-subtle message that PETA India had prominently displayed at the table: a sign that implored, “Give Pigs the Gift of Life: Go Vegan.”