Some Santa Monica citizens are outraged after a group of atheists flooded a city lottery with applications, took over the space where more than a dozen of the city’s Nativity displays would normally be set up, and then simply left much of  the space vacant. PETA is reaching out to the atheists to ask permission to set up our own “Give Peas a Chance” billboard in one of the empty areas. 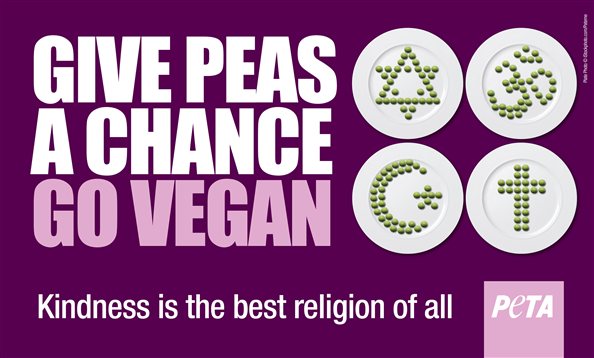 In our letter to the atheists’ spokesperson, PETA President Ingrid E. Newkirk points out: “From factory farms to holy wars, so many lives have been lost because of an inability to relate to others who are different from us in unimportant ways. Whether we believe in Jesus or the Flying Spaghetti Monster, we can promote peace on Earth by adopting a cruelty-free vegan diet.”