After PETA alerted Robeson County, North Carolina, Sheriff Burnis Wilkins that illegal drug use and deaths were likely at Sunday’s unsanctioned horse races at Carril Red Springs, at least two horses used in the races died. Both Trump My Record, the most famous horse on the black market circuit, and Hotstepper were champions at regulated racetracks—Hotstepper won the $1.2 million 2018 All American Derby—before being switched to unregulated racing. In response, PETA fired off a complaint to Wilkins this morning, calling for an investigation into the horses’ deaths. 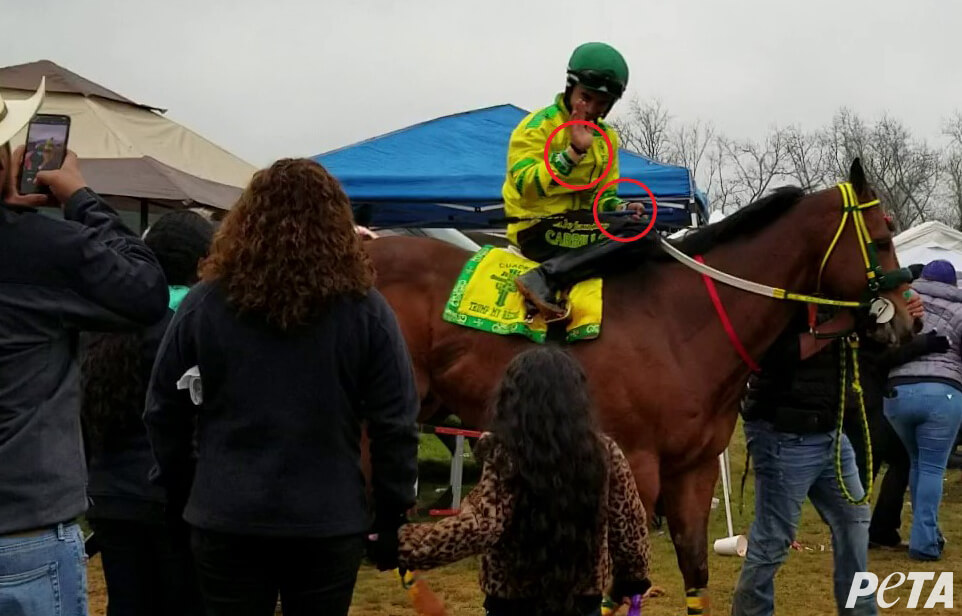 PETA had informed Wilkins that the races had been moved from Georgia to North Carolina in an apparent attempt to avoid the scrutiny of law enforcement after a PETA exposé revealed that racing teams electroshocked horses and doped them with street drugs, resulting in injuries, including fatal ones, to horses and jockeys. PETA’s investigators witnessed workers from Cuadra Cristo Rey—the stable behind both horses who died after Sunday’s races—injecting horses on the tracks, and Trump My Record’s jockey, Alex Carrillo, was filmed using electric shock devices.

PETA had warned that the black market races headed to Robeson County could be catastrophic, and now two more horses are dead. If these horses were illegally drugged, whipped, and pushed to their deaths, the Robeson County Sheriff’s Office has an obligation to hold their abusers accountable.

In addition to widespread doping with methamphetamine, cocaine, Ritalin, and other substances, PETA’s 10-month investigation into underground Quarter Horse Racing (covered by The Washington Post) documented the exchange of hundreds of thousands of dollars in likely illegal gambling—all of which PETA reported to Wilkins before Sunday’s races.

Previously, Alex Carrillo—a jockey whose use of electroshock devices on horses was exposed by PETA’s investigation of underground races—was fined for excessive whipping of a horse at Ruidoso Downs, a regulated track in New Mexico. The horse he whipped was removed from the track by an ambulance.

Two horses in South Carolina who were forced to participate in underground races have now died because of equine infectious anemia, which is a viral disease. They likely contracted the disease because stables used the same needle to inject multiple horses.