This poor mother dog was so emaciated that she barely had the strength to nurse her six puppies. She was confined to a bare wooden box located behind a pizza parlor and was weighted down with a heavy chain. 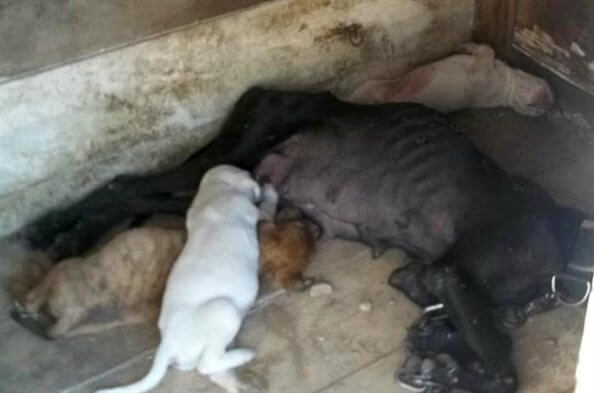 After a member of Hoovers Hause All Dog Rescue spotted one of the pups wandering near the busy street beside the restaurant, she soon discovered the mother dog and called the sheriff’s department. But catch this: Law enforcement gave the owner two to three weeks to put weight on the mother dog. Hoovers Hause All Dog Rescue had a better idea—the group posted pictures of the dogs on Facebook and asked people to get the sheriff’s department to act now.

When a PETA supporter alerted us to the situation, we asked the poster to try to persuade the owner to give the dogs over to her. Bingo! All the dogs were whisked off to a veterinarian (likely the first time the mother dog had ever received medical care). The rescue group paid for the mother dog’s heartworm treatment and agreed to care for her and her puppies while screening potential adopters.

The owner had told police that the mother dog was so thin because she had been poisoned, but with simple helpings of good food, this lucky rescued girl has already gained 8 pounds. PETA is now urging officials to pursue cruelty charges.

If you see anything on social-networking sites that suggests an animal could be in danger, please contact authorities—and, if they are unresponsive, call PETA.