No? In honor of “Fish Are Friends, Not Food” Week, here are five reasons why we should leave our finned friends off our forks too: 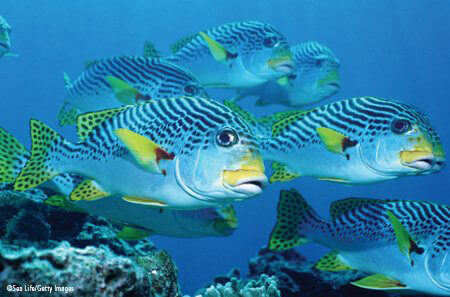 1. Fish are smart cookies. Fish can count and tell time, they are fast learners, they think ahead, they have unique personalities, and they may even have a sense of humor.

2. Eating fish is not so smart. Fish flesh is frequently contaminated with mercury, medications, household chemicals, PCBs, DDT, and other toxins. If you wouldn’t drink water tainted by sewage, heavy metals, and other contaminants, why risk your health by eating fish who are pulled from this toxic brew?

3. Fish feel pain—as all animals do. A recent undercover investigation inside a fish slaughter facility found that workers were using pliers to peel away strips of skin from conscious, struggling animals.

4. The worms crawl in, the worms crawl out …. A few years ago, a man sued a Chicago restaurant after, he said, he became violently ill from eating an undercooked salmon salad—and later passed a 9-foot-long tapeworm. Seafood can also spread hepatitis A, noroviruses, and other foodborne illnesses.

5. If we keep gobbling them up, there won’t be any fish left. Scientists say that two-thirds of all tuna, grouper, cod, and other “predator fish” have been caught and consumed by humans—and the rest will likely perish in the decades ahead. The only truly “sustainable” fish is fake.

Check out PETA’s website for more reasons to stick up for fish.