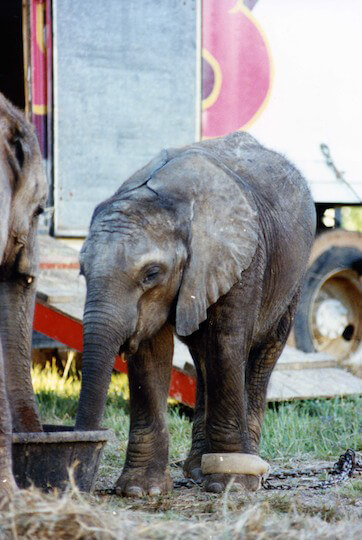 The iconic movie Dumbo, released in 1941, was ahead of its time in showcasing how baby elephants in circuses are torn away from their mothers, beaten into submission, and sentenced to a life in chains and boxcars when they aren’t being forced to perform dangerous tricks. Fast-forward to Disney’s upcoming live-action version, and PETA is asking producers to tweak the endearing film’s ending to allow the baby elephant to retire from entertainment altogether. Dumbo would be in the good company of Dory! The ending of the upcoming Finding Dory was changed after producers saw the documentary Blackfish and didn’t want the fish to end up in a marine abusement park like SeaWorld. They were quoted as saying that they “didn’t want to look back on this film in 50 years and have it be their Song of the South.”

In Disney’s original film, Dumbo jumps from the “frying pan” of the circus to the “fire” of the movie industry. Elephants forced to perform in films and television suffer, just as elephants in circuses do. (Four baby elephants used by Ringling Bros. have died.) Undercover video footage shows trainers at an elephant training facility called Have Trunk Will Travel, which supplies elephants to the film and television industries, striking elephants with bullhooks and electric shock prods.

Producers of the new version of Dumbo have already done the right thing by announcing that, just like in the masterful Dawn of the Planet of the Apes, they’re going to use computer-generated imagery. Now we’re hoping they’ll take this one easy additional step that’ll go a long way toward helping other real-life “Dumbos” still feeling the sting of the circus bullhook.

To learn more about animals used in film and television, visit AnimalsInFilmAndTV.com.