Remember Dillan the bear, who suffered for 10 years at the Union County Sportsmen’s Club in Pennsylvania? Well, it’s now been two years since PETA’s big push led to his rescue and transfer to The Wild Animal Sanctuary (TWAS) in Colorado—and we’ve got new video showing him thriving in his massive naturalistic habitat:

When Dillan arrived at TWAS, he was morbidly obese, weighing two and a half times as much as an average adult Asiatic black bear, and suffering from painful dental disease that had gone untreated for years. He’s since undergone dental surgery, and he’s been placed on a healthy diet to help him lose weight. Today, he no longer rocks back and forth, as he did when he was kept in a barren concrete-floored cage next to a shooting range. Instead, he spends his days splashing, stretching, sunbathing, and hanging out with other bears—including his BFF, Lily—also rescued after PETA stepped in. (At this very moment, he’s spending his day hibernating, a natural need that he was denied the opportunity to meet at the sportsmen’s club, where he was expected to entertain tourists year-round.) And, thanks to PETA’s work, the Union County Sportsmen’s Club was recently banned from possessing nearly all animal species, including bears.

In honor of Dillan’s two-year rescue anniversary, give him the best gift of all: Never visit a roadside zoo, and speak out to help bears still suffering at tourist traps.

To date, PETA has helped secure the release of 76 bears from abusive exhibitors and private owners. We’ve worked to transfer them safely to reputable, accredited sanctuaries. We’ve also helped rescue 76 big cats, 19 chimpanzees, two baboons, and other exotic animals who were exploited and used for entertainment.

It’s been half a year since The Wild Animal Sanctuary rescued Dillan from the Union County Sportsmen’s Club in Millmont, Pennsylvania, which neglected him and left him to suffer. And to celebrate the six-month anniversary of his rescue, PETA is renewing our call for Pennsylvania officials to ensure that his abusers are charged.

Dillan may now be living a much better life, but justice must be served. People held the bear inside a small enclosure, where he was denied exercise and mental stimulation, became morbidly obese, and repetitively rocked back and forth—an abnormal behavior indicative of extreme stress—and they failed to get him proper veterinary care for dental disease and other ailments. They deserve to pay the price for what they did.

PETA wants these animal abusers to be held accountable.

Originally posted January 20, 2020:
­
Breaking: Following a vigorous, months-long PETA campaign, Dillan, a morbidly obese Asiatic black bear suffering from painful and life threatening dental disease, has been rescued! He was previously held in a cramped cage—next to a noisy shooting range—at the Union County Sportsmen’s Club in Millmont, Pennsylvania. There, he was forced to live on hard concrete and denied adequate veterinary care for his serious medical conditions. But thanks to the hard work of compassionate people like you, he’s now on his way to The Wild Animal Sanctuary in Colorado. 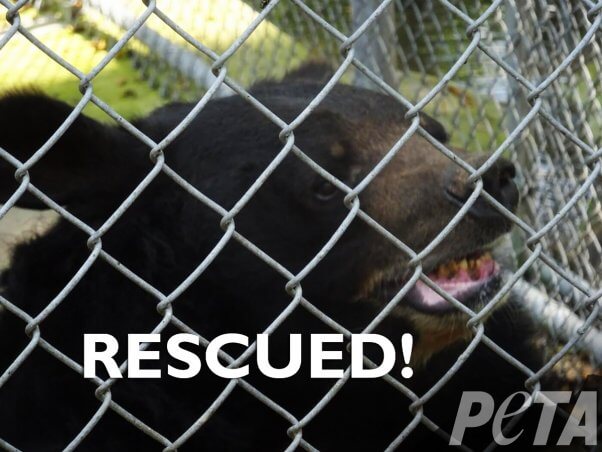 After just one day out of the roadside zoo, Dillan stopped rocking back and forth—an abnormal repetitive behavior indicative of extreme stress—and embraced his new surroundings. Watch Dillan tuck into feasts of fresh fruit and other foods (he particularly loved the grapes), soak in the sun, splash in his pool, and sniff the fresh air:

This exciting rescue comes just days after PETA friend Alec Baldwin sent a public letter to Pennsylvania Gov. Tom Wolf urging him to intervene in Dillan’s case. Baldwin pointed out that the U.S. Department of Agriculture (USDA) had continued to cite the Union County Sportsmen’s Club for failing to provide Dillan with needed veterinary care.

Actor Alec Baldwin has urged the Governor of PA to help save Dillan from Union County Sportsmen's Club!In his letter,…

Posted by PETA (People for the Ethical Treatment of Animals) on Wednesday, January 15, 2020

“This long-suffering bear finally has a chance to consume healthy foods, exercise on soft natural terrain, receive much-needed care, and engage in bear behavior such as hibernating, foraging, and swimming. PETA is now calling on the Union County Sportsmen’s Club to release the remaining animals in its custody to reputable sanctuaries, too.”

In addition to enlisting Baldwin’s support, PETA’s multifaceted campaign to secure Dillan’s freedom from neglect included posting a billboard urging drivers not to stop at the Union County Sportsmen’s Club, running television and radio ads on local stations alerting people to Dillan’s suffering, and sending the roadside zoo bags of coal for Christmas. We also submitted complaints to the USDA that included photos and video footage documenting that Dillan continued to suffer from hair loss, irritated skin, and morbid obesity as well as broken teeth, discolored gums, and significant gum recession, which are evidence of painful, advanced dental disease. Compassionate PETA supporters have taken nearly 150,000 actions to urge the club to close all of its shoddy wildlife exhibits.

Dillan still has a long road to recovery—and his survival isn’t guaranteed. Because the Union County Sportsmen’s Club allowed his severe dental disease to progress for years without veterinary care, he’ll need urgent veterinary intervention. Stay tuned: We’ll have updates throughout the week as we learn more about how Dillan is doing in his new sanctuary home.

To date, PETA has helped secure the release of 73 bears from abusive exhibitors and private owners. We’ve worked to transfer them safely to reputable, accredited sanctuaries. We’ve also helped rescue 41 tigers, 10 chimpanzees, and two baboons who were exploited and used for entertainment.