After PETA advocated for five months for our right to speak up in defense of cows, Wyoming’s Jackson Hole Airport finally yielded! Our “Cruelty Doesn’t Fly” ad will be featured in a brochure rack at the airport through June 2023. This is a win for our free speech rights as well as animal rights. 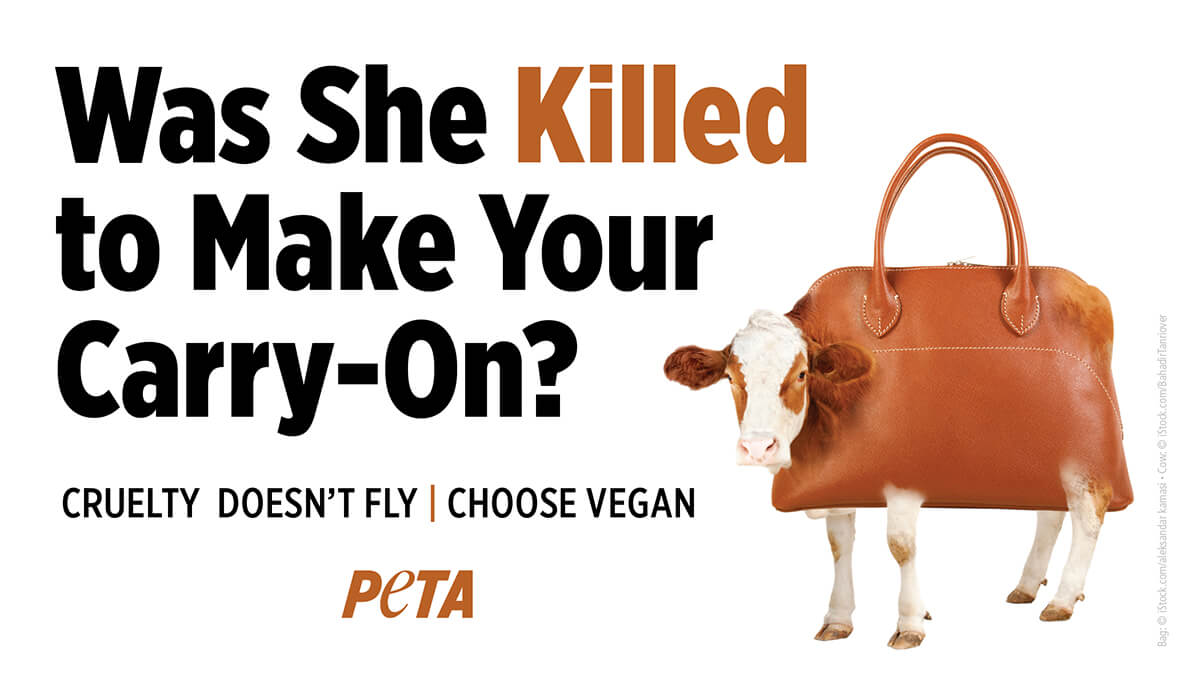 It’s Our Right to Work for Cows’ Rights

We applied to have the ad placed at Jackson Hole Airport in June 2022, but we were denied the ad space and given no reason. We figured something was afoul, so we checked it out—and what we learned confirmed our worst suspicions.

“[W]hy does that bag have to look so much like mine.”

“I just walked past the cow hide chairs reading this email … ‘[n]ot sure this message is quite right.”

—Internal e-mails at Jackson Hole Airport regarding the ad

In a records request from October 2022, we found strong evidence of discrimination against PETA from the airport, including statements such as “[W]hy does that bag have to look so much like mine” and “I just walked past the cow hide chairs reading this email.” If anything, it sounds as though staff members’ only problem was that our message was effective!

Jackson Hole Airport is in the middle of Wyoming’s cow country. More than half of all farm income in the state comes from exploiting cows and their babies for their flesh, so it’s the perfect place for PETA’s message to stand loud and proud.

When our lawyers pressed the airport for any evidence supporting what appeared to be blatant viewpoint discrimination in violation of the First Amendment, it surrendered and allowed us to exercise our right to free speech. Now, “Cruelty Doesn’t Fly” brochures will inform guests of the airport that exploiting cows for their skin destroys their lives, as well as negatively affecting human health and our planet.

There is no harm-free way to produce leather. Leather is a coproduct of the meat industry, and profiteers directly contribute to the twisted business of cow murder. Workers often painfully harm cows without providing them with any form of pain relief: They castrate them, brand their flesh, and chop off parts of their sensitive tails. At the slaughterhouse, they may dismember and skin them while they’re still conscious. 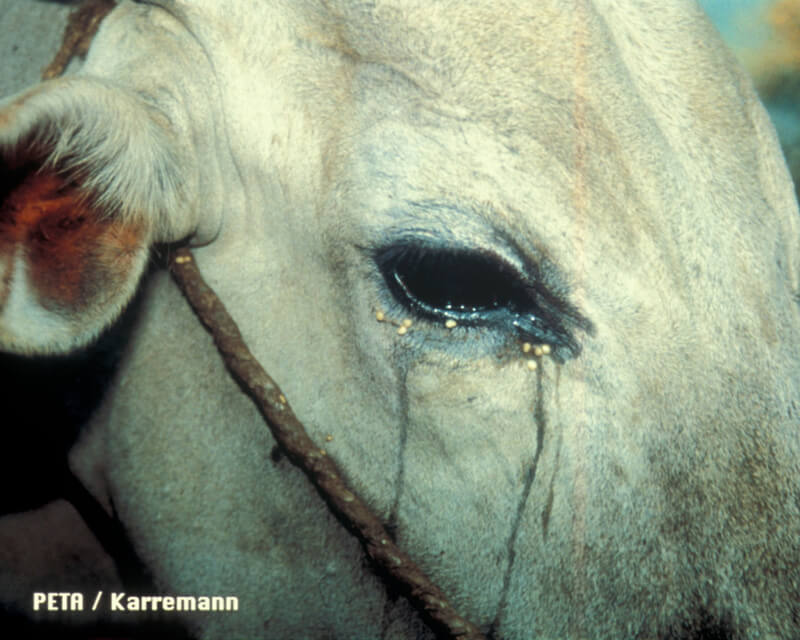 In almost all cases, leather is produced outside the U.S., in places where big-name sellers can keep the dirty business away from their customers’ eyes.

In India, herds of sensitive, social cows are often forced to march hundreds of miles to their deaths, through scorching heat and dust, without food or water. Their tails are deliberately broken, and tobacco and chili peppers are rubbed into their eyes to drive them on or force them to stand after they collapse. In Cambodia and Thailand, PETA Asia eyewitnesses saw workers repeatedly bashing cows in the head with sledgehammers. In Brazil—the world’s single largest source of animal hides—a PETA video exposé revealed that gentle cows and bulls were burned in the face with hot irons, beaten, and electroshocked.

The skin now sold in shops as bags, shoes, belts, and other items belonged to individuals whose lives were made hellish by the humans exploiting them.

Learn more about how leather production is destructive, including how it poisons exploited workers and entire communities and contributes more to water pollution, water depletion, and greenhouse gas emissions than the production of any synthetic or plant-based vegan leather.

Urge Levi’s to Use Vegan Leather!

Despite its supposed insistence on environmental responsibility and empathy, Levi’s still uses cows’ skin for the patches on some of its jeans. It does this despite knowing about the immense suffering cows endure for leather and how its production affects humans and the environment. If Levi’s made the switch to vegan leather today, it would join the ranks of von Holzhausen, Tesla, and Jon Bon Jovi’s clothing line.

Tell Levi’s that leather production is destructive and that it must switch to using only durable, sustainable vegan leather:

Speak Out for Cows!