New footage captured in the Spanish town of Valmojado is, once again, causing an international backlash against the graphic blood sport of bullfighting. The video, taken during a local festival, shows a group of grown men plunging spears into the body of a baby bull. The crowd can be heard in the background, cheering as the disoriented young animal staggers around, blood pouring from his mouth.

According to reports, the bull killed in the above footage was so young that his horns were not even fully formed, and he was still nursing from his mother. Grown men reportedly plunged spears and blades into his sides, causing him to lose so much blood that he was said to have collapsed multiple times. Eventually, exhausted from the pain, he was unable to stand back up. His ears were cut off after he finally succumbed to his many injuries and died, while depraved onlookers cheered.

There is nothing “brave” about a group of men with weapons teaming up to torture and kill a baby. Period.

Tradition is never an excuse for cruelty.

The cruelty and violence inherent in bullfighting can encourage a dangerous and lawless atmosphere in which the safety and lives of humans and animals are put at risk for the sake of a reprehensible form of entertainment. Numerous studies indicate a direct link between cruelty to animals and other forms of violence. A study by the Massachusetts SPCA and Northeastern University found that people who abused animals were five times more likely to commit violent crimes against other humans.

But there is hope.

New knowledge of and shifting attitudes toward animals and their intelligence, sensitivity, and emotions are already resulting in significant changes in the ways in which animals are treated. Earlier this year, after protesters from PETA U.K. and other animal-protection groups went to Pamplona, Spain, for the annual protest against the Running of the Bulls and the barbaric bullfights that follow, the city’s mayor, for the first time ever, spoke out in support of the campaign:

“[T]his is a debate that sooner or later we will have to put on the table. For a very simple reason, and that is that basing the festival on the suffering of a living being, in the 21st century, is something that, at best, we have to rethink.” 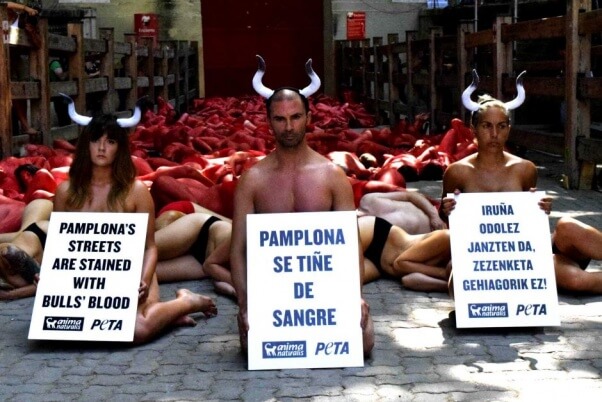 Vote with your wallet: Never attend a bullfight, rodeo, circus, or any other event in which animals are mistreated, suffer, or die for cheap human “entertainment.” And be loud about it! Your voice makes a difference for animals suffering all over the world. Share this story with your friends, family, and social media followers. Let them know that, together, we can bring an end to such barbaric practices.