PETA has asked the Washington State Patrol (WSP) to open a criminal investigation after as many as 70 animals endured prolonged agony and died in the October 6 crash of a cattle transport truck container in Seattle. The request also urges WSP to bring cruelty-to-animals and unsafe-animal-transport charges against the person or people responsible if criminal actions are discovered. 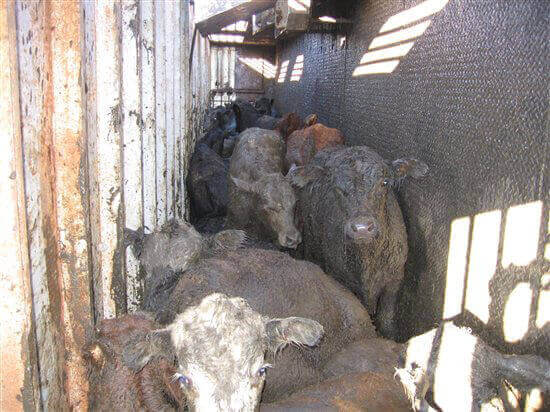 Negligence Can Be Deadly

In a jarring reminder that the trucks used to transport farmed animals are no less cruel and treacherous than the factory farms and slaughterhouses that they travel between, the cattle container came unhinged on Interstate 90 and slid 200 yards along the road when the driver, hauling for J & H Express, Inc., rounded a curve. Video of the gruesome scene shows struggling survivors kicking their limbs and hooves, which were stuck in the container’s grated sides. Photos by WSP responders reveal cattle piled on top of one another and covered with feces.

The animals were apparently denied emergency veterinary care. About three hours passed before the cattle—who had already endured many hours of transport from Hawaii—were driven three additional hours to Sunnyside, Washington, where at least 20 of the injured were reportedly discovered to have died. The driver was cited for traveling too fast and failing to secure his load. WSP personnel found that he had “failed to lock down all four corners” of the container given that two of its locking pins “had no damage or marking on them.”

Taking Cruelty on the Road

According to Washington law, inflicting needless suffering on an animal through recklessness or criminal negligence or failing to provide one’s animals with necessary medical attention constitutes second-degree cruelty to animals if the animal suffers unnecessary or unjustifiable physical pain. State law also makes it clear that causing animals to be transported in a way that jeopardizes their safety or that of the public is a misdemeanor.

Even without the flagrant and possibly illegal actions that lead to truck accidents (which happen frequently) and the misery that they cause, transport is hell on animals, who are often beaten or shocked to get them to cram into the trailer of the 18-wheeler. During the trip, they are often deprived of food and water for the entire journey, which may take days. They suffer from heat exhaustion in the summer and freeze to the sides of the truck in winter, and they’re forced to inhale diesel exhaust and ammonia fumes from their own waste—if they can breathe at all. After the trauma of the farm and the truck, many animals are so ill or injured that they’re unable to stand and walk on their own, so they’re kicked or dragged off the trucks to their deaths.

From birth to slaughter, the life of every animal used for food is a long procession of indignities and injuries, which are funded with each dollar spent on meat, eggs, or dairy products. Don’t buy into animals’ misery—go vegan today!