Two goats who are sisters, a dog with an infected wound from an embedded collar, and a cat trapped inside a wall behind a bathtub: These are just a few of the animals PETA’s fieldworkers helped in July!

Check out some more of our recent cases and the actions we took:

PETA gave Queen, Desi, and Star free door-to-door rides to and from their free spay appointments. 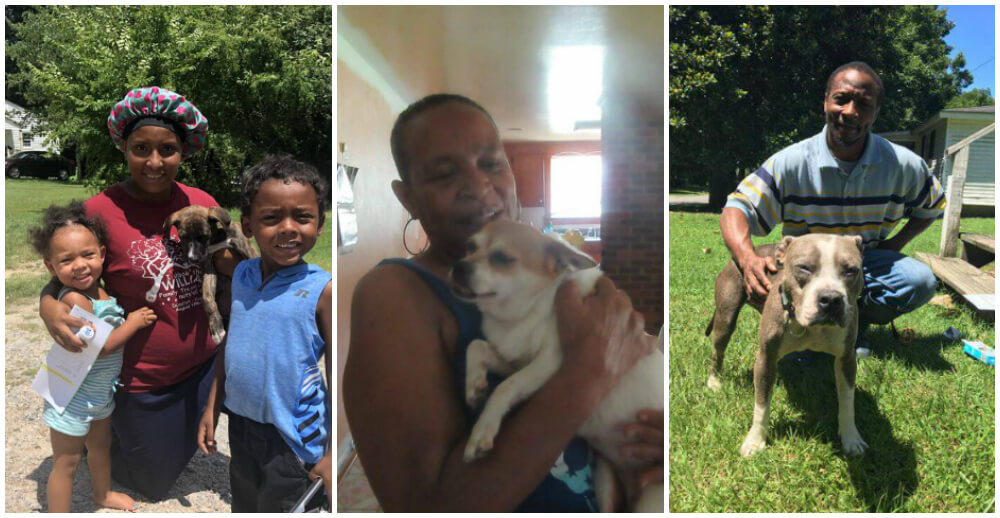 From left to right: Queen, Desi, and Star

Nineteen-year-old Spooky became septic after dental disease led to a severe mouth infection. The infection spread, causing a hole to form between his jaw and nasal cavities and resulting in a maggot infestation. We discussed the situation with the owner—who was very distressed—and explained why waiting this long to do the right thing hadn’t been humane. We gave Spooky a peaceful end to his drawn-out suffering. 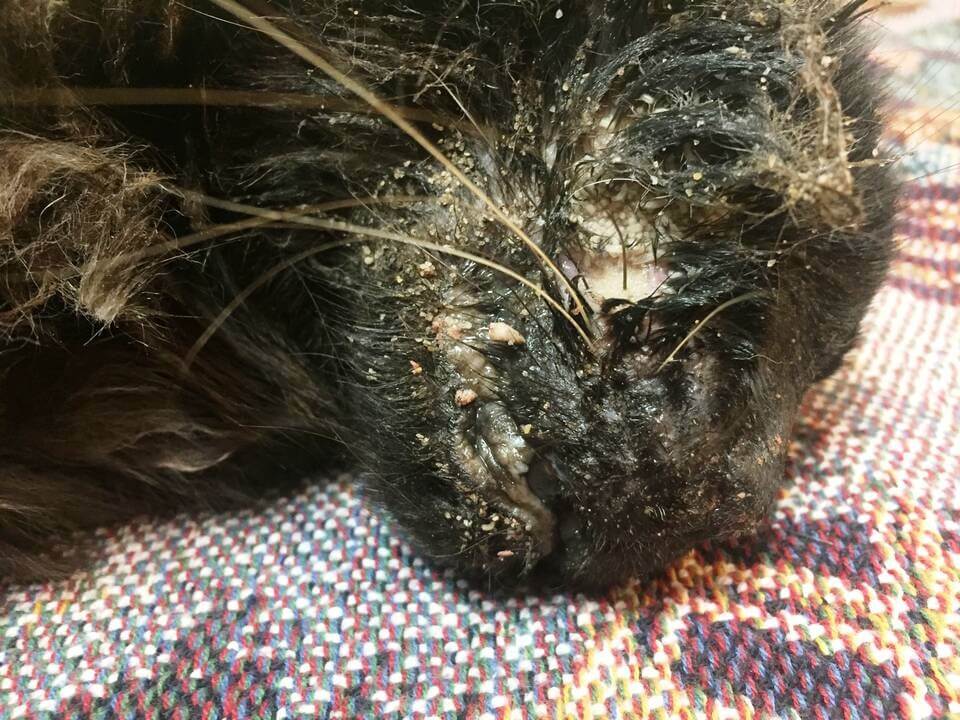 Smokey, a small poodle mix, spent most of his time outdoors. He developed a skin infection as well as an agonizing flea allergy. Thankfully, his owner opted to give him to PETA. After receiving some love and care, he was transferred to the Virginia Beach SPCA for adoption. 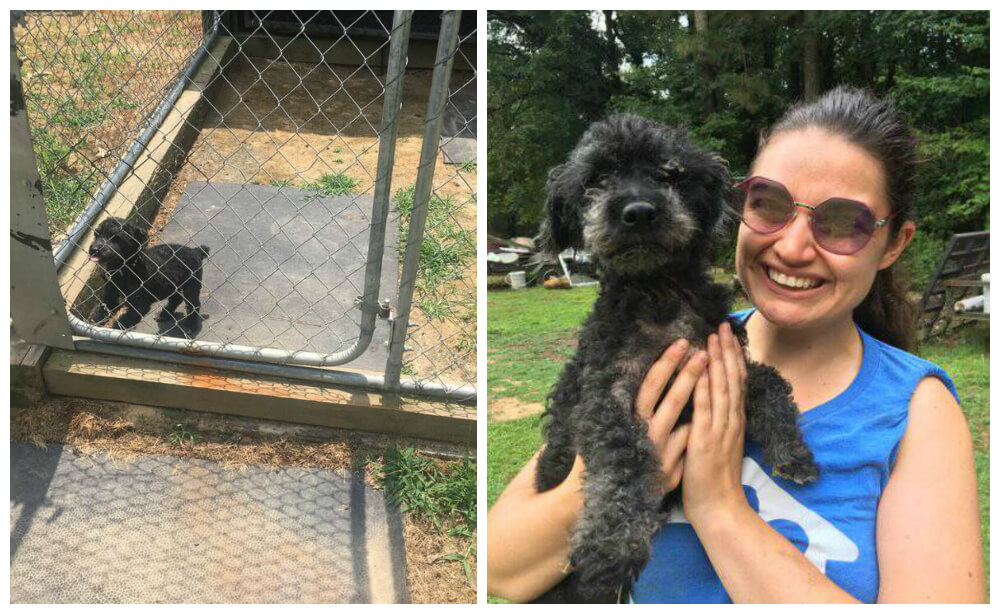 We neutered Tiger earlier this month, and he received a brand-new, sturdy PETA doghouse to help protect him from the elements. 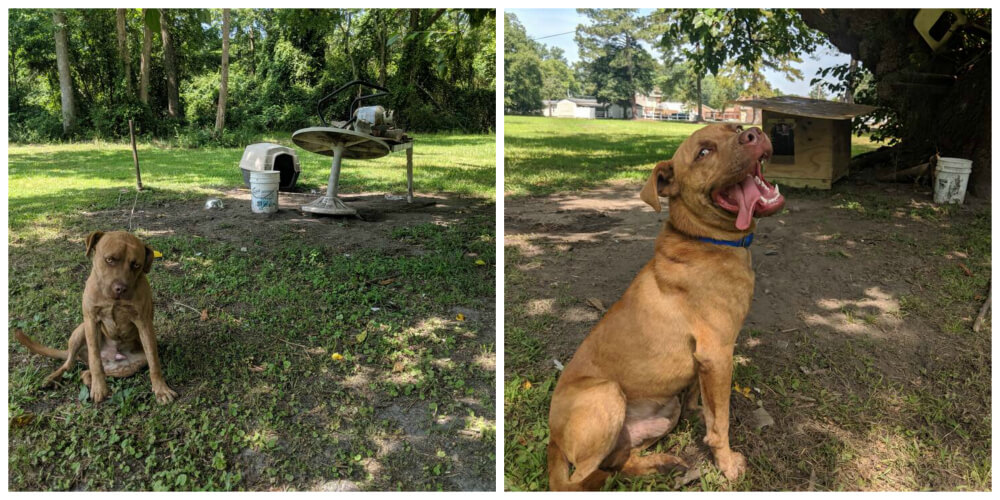 Authorities found Charlie with a horrific wound around his neck after his owner used a pair of bolt cutters to remove a deeply embedded collar, which was on top of a choke collar. A deputy forced the owner to relinquish custody of the dog as well as numerous cats found on the property. Charlie was later euthanized. 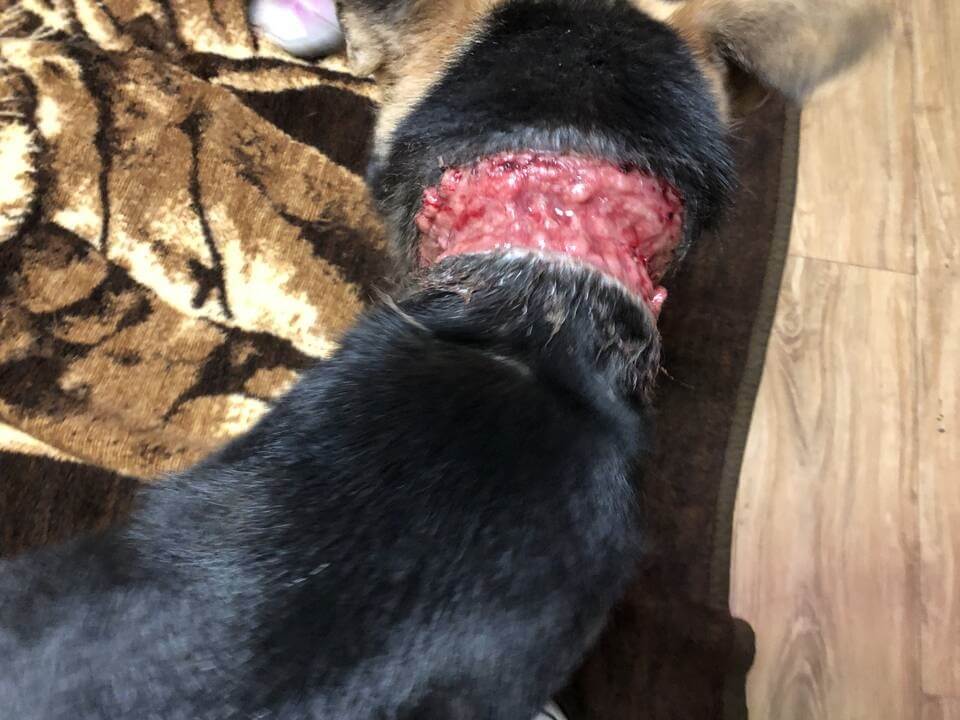 The same woman who’d neglected Charlie gave this sad and frightened beagle mix, whom she’d kept chained outdoors, to PETA. After receiving some much-needed attention at our shelter, Buttercup moved in with her new foster family. 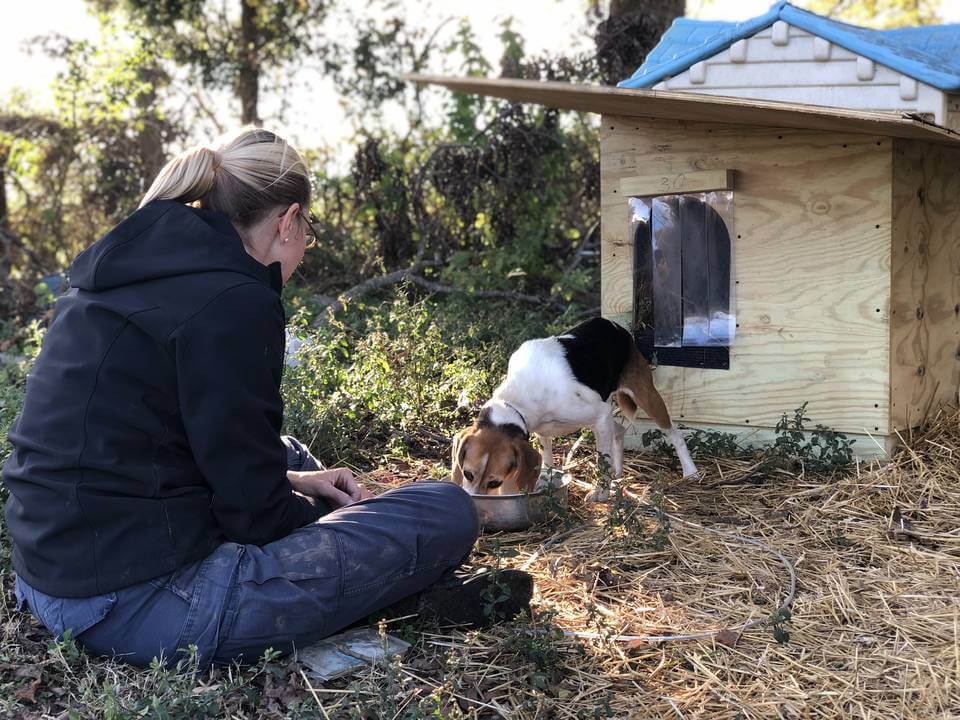 When our fieldworker met Opie, he was severely bloated and immobile and had hair loss, wounds, and flea allergy dermatitis—and he was crawling with fleas. His elderly owner gave him up for end-of-life help because of suspected heart failure. We provided him with a peaceful release from his chronic suffering. 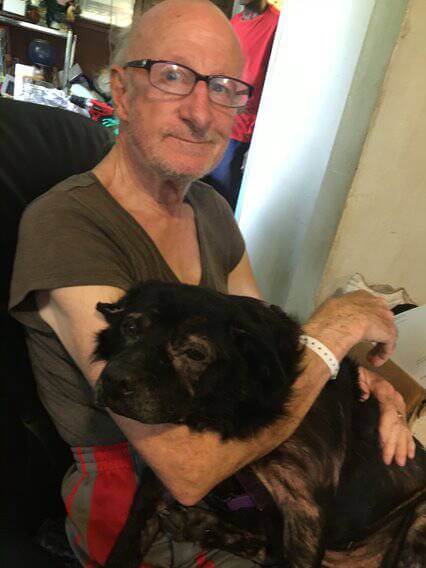 Late one evening, PETA fieldworkers rushed to help this sad elderly lab who was seizing and beginning to die in the front yard of his home. We picked him up and rushed him to our shelter for immediate euthanasia. 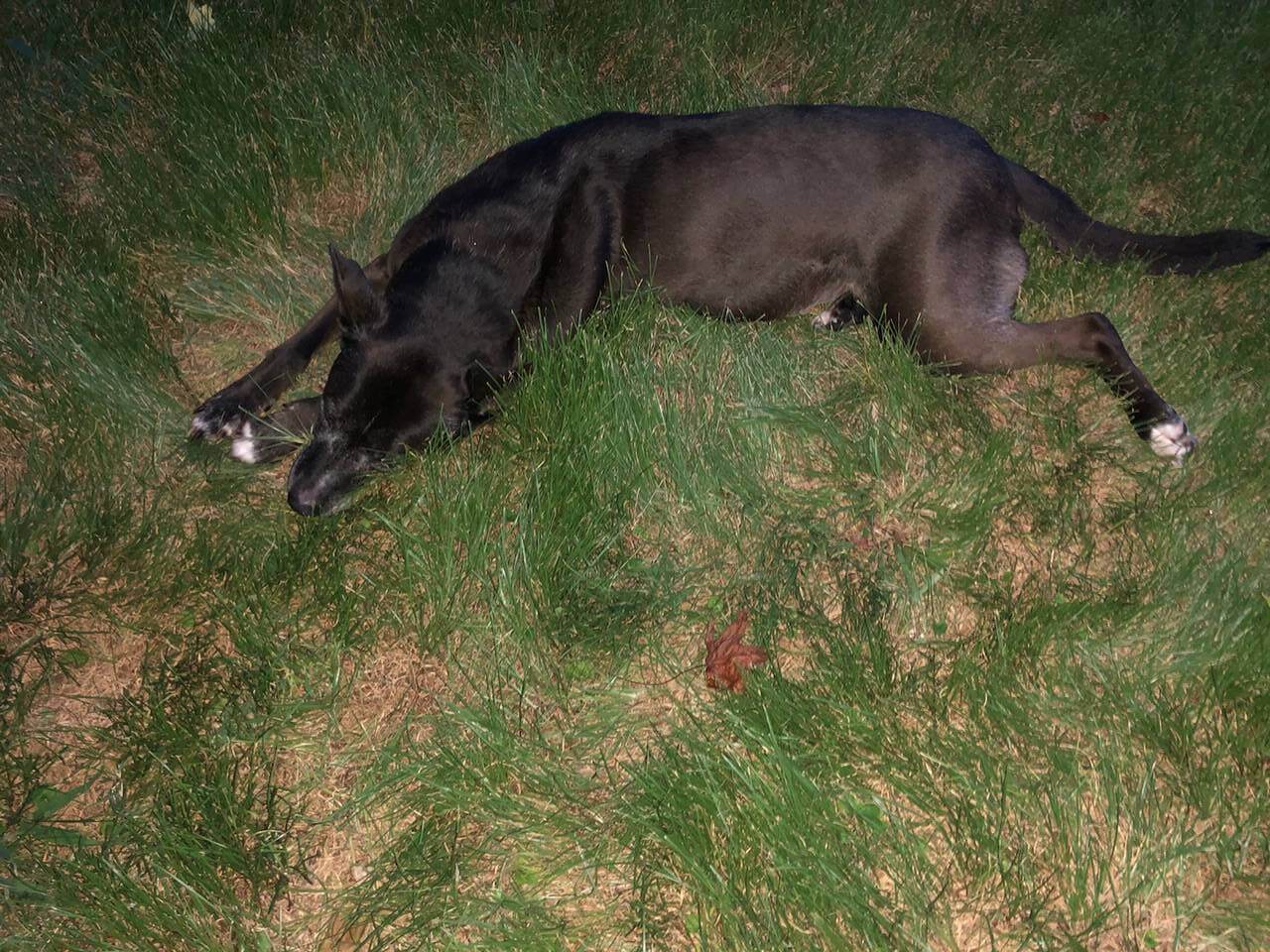 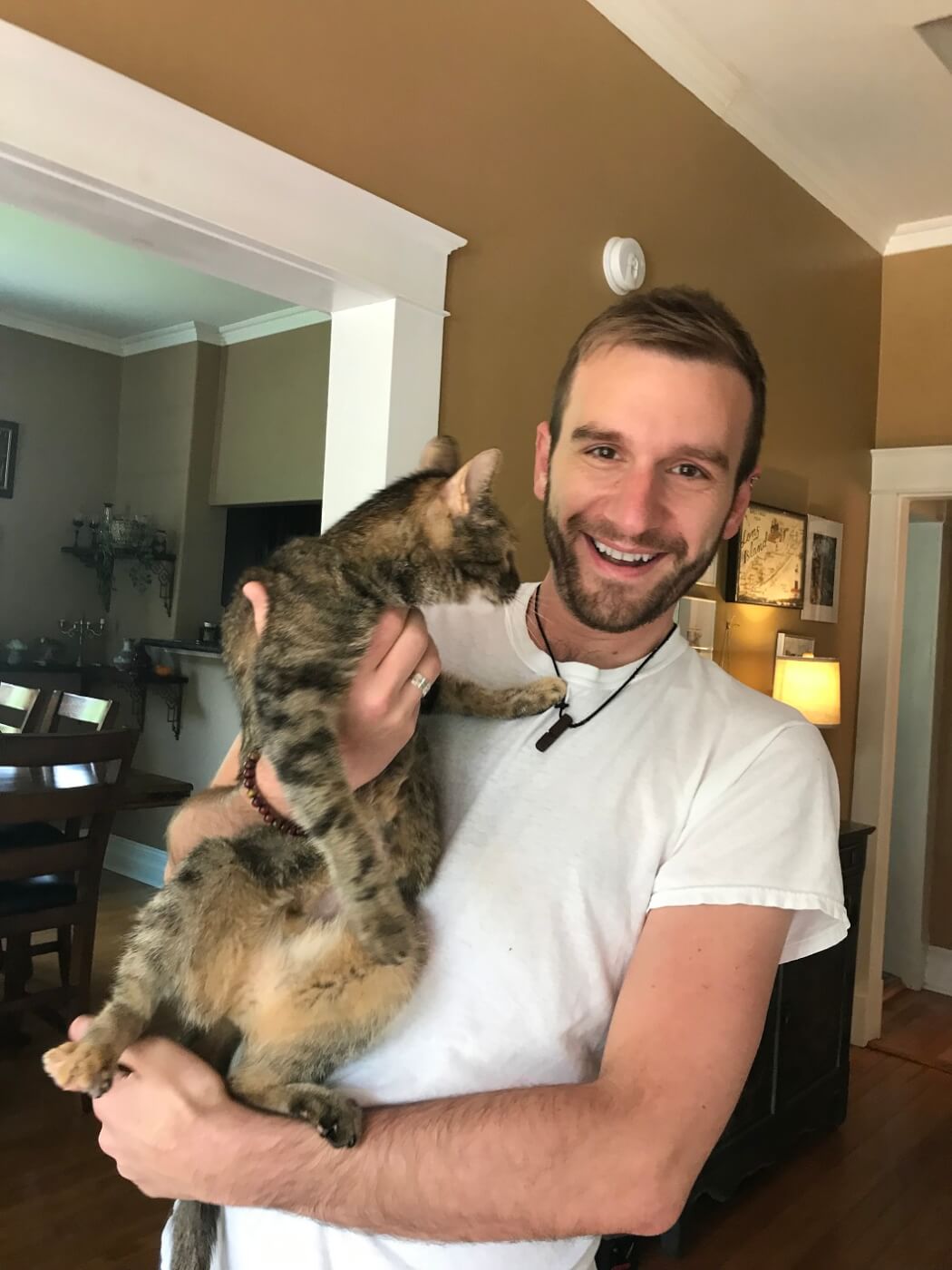 Keena received a custom-built PETA doghouse to replace the useless plastic barrel she’d been given. We also treated her for fleas and ticks and applied fly-strike ointment. 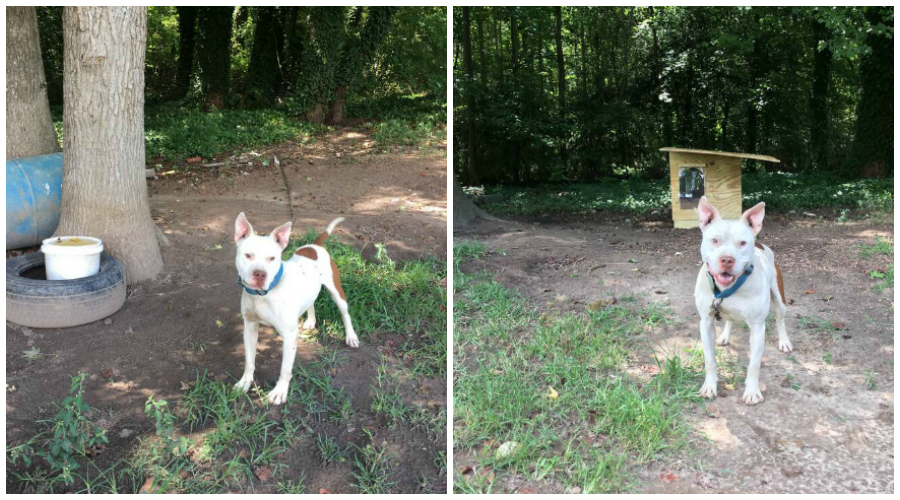 Max also had nothing but a plastic barrel to protect him from the elements. He, too, received a brand-new custom-built PETA doghouse. 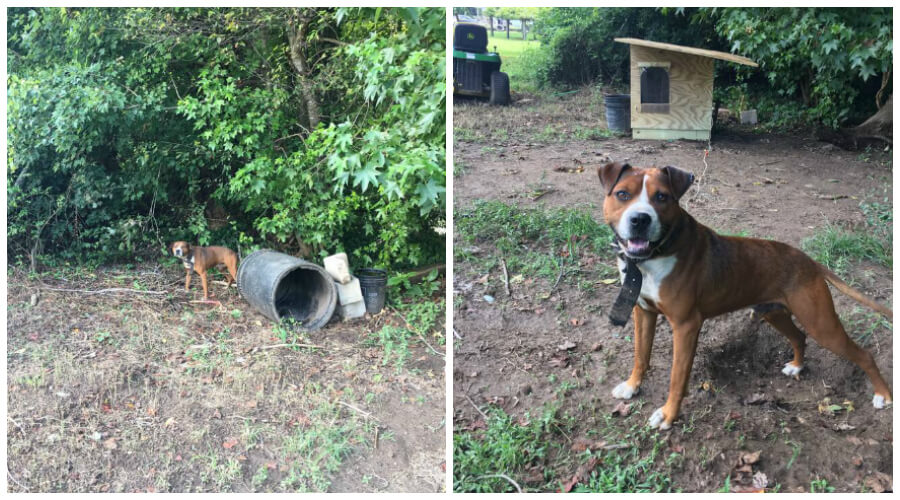 Imagine being kept outdoors 24/7, even in the extreme summer heat. That’s exactly how Rosa was forced to live. She’d developed a skin infection that was left untreated for quite some time. Her owners gave her to PETA, and we transferred her to the Norfolk SPCA for a chance at adoption. 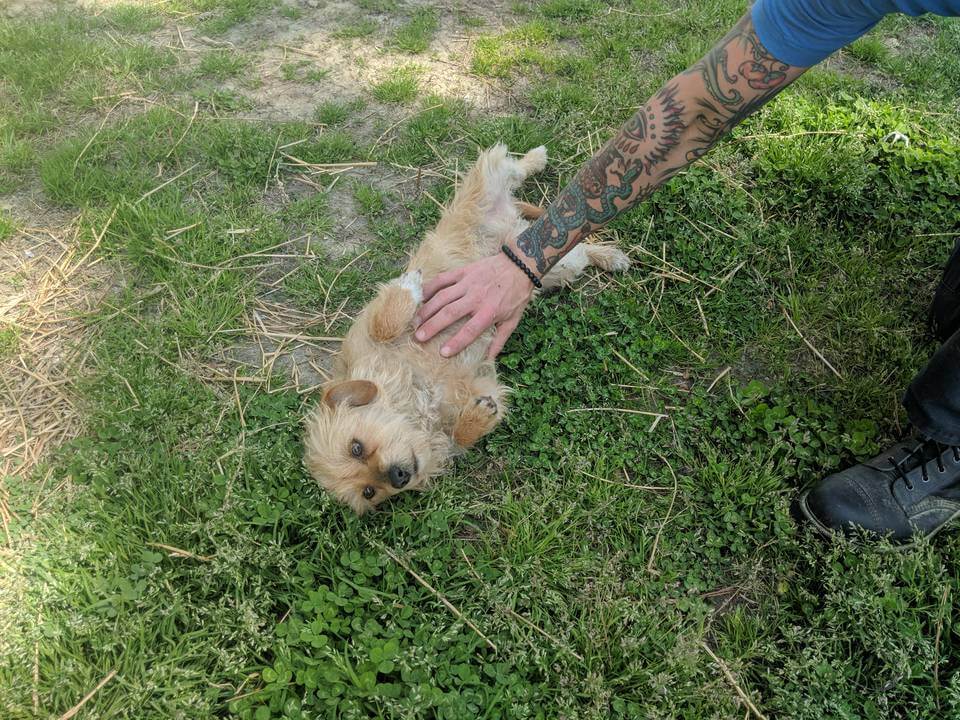 We found T-Money locked inside a small, filthy wire crate during July’s heatwave with no access to clean water. After much discussion, he was given to us and taken in by the Chesapeake Humane Society, one of our shelter partners. 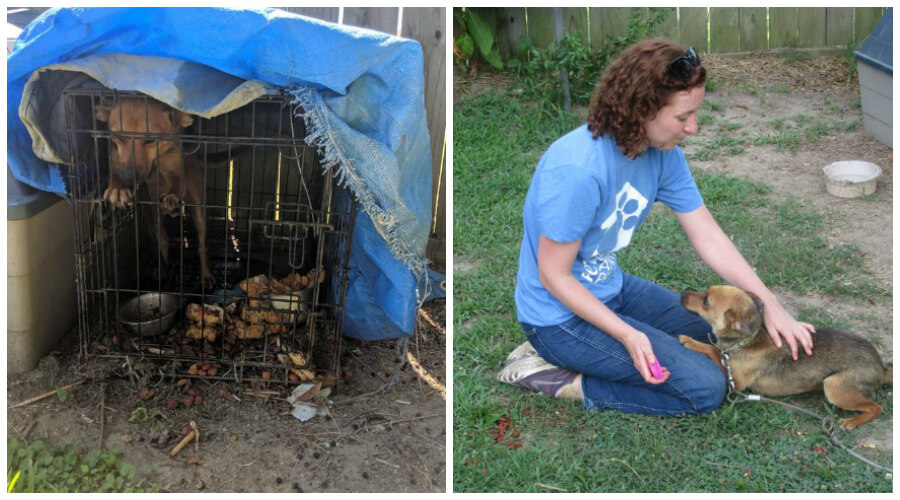 Tina and Ike spent years living in atrocious conditions in a disgusting makeshift pen. The only time their living area was ever cleaned was when PETA’s fieldworkers stopped by. Thankfully, we were able to get them out and transferred to the Norfolk SPCA, where they’re considered a bonded pair to be placed together. 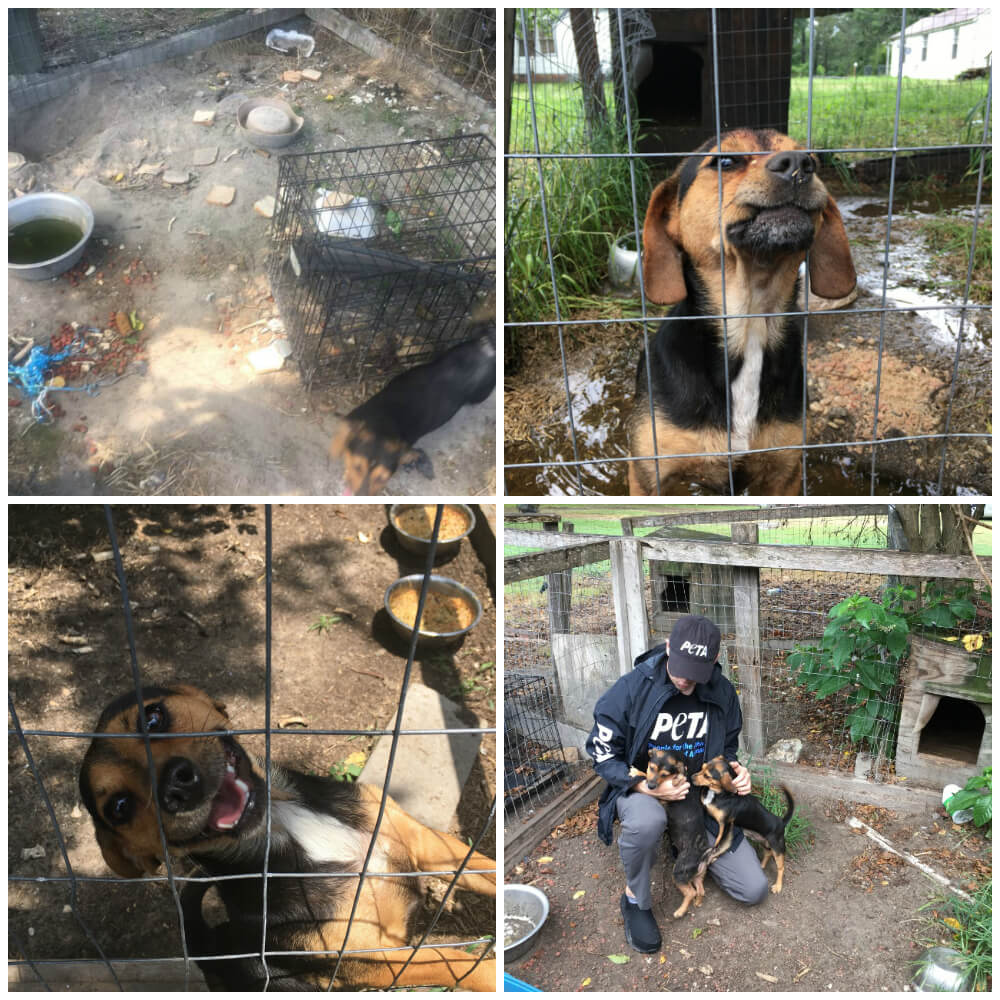 A Cat in Hayes, Virginia

PETA fieldworkers rushed out to secure euthanasia for this badly injured feral cat whose wounds were infested with maggots. 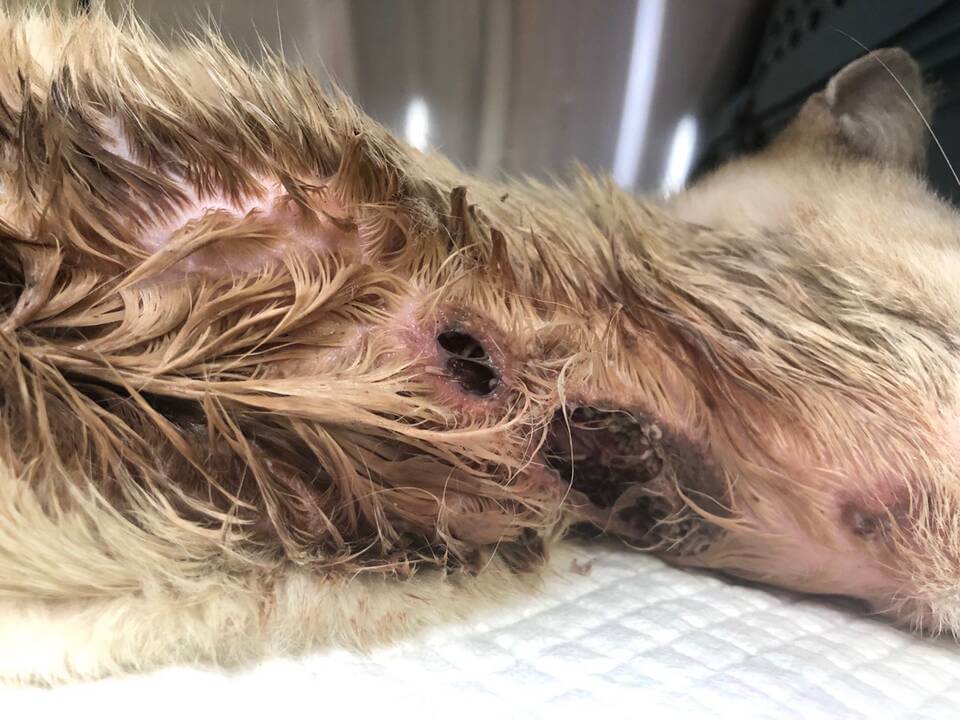 A woman left town knowing that her chained dog was not eating. By the time she contacted PETA, she didn’t know whether the animal in her backyard was alive or dead. Fieldworkers rushed out and discovered that Moon, a senior pit bull, had died underneath a cinderblock shed. A necropsy revealed that he’d suffered from a blockage and his intestines were full of dirt. 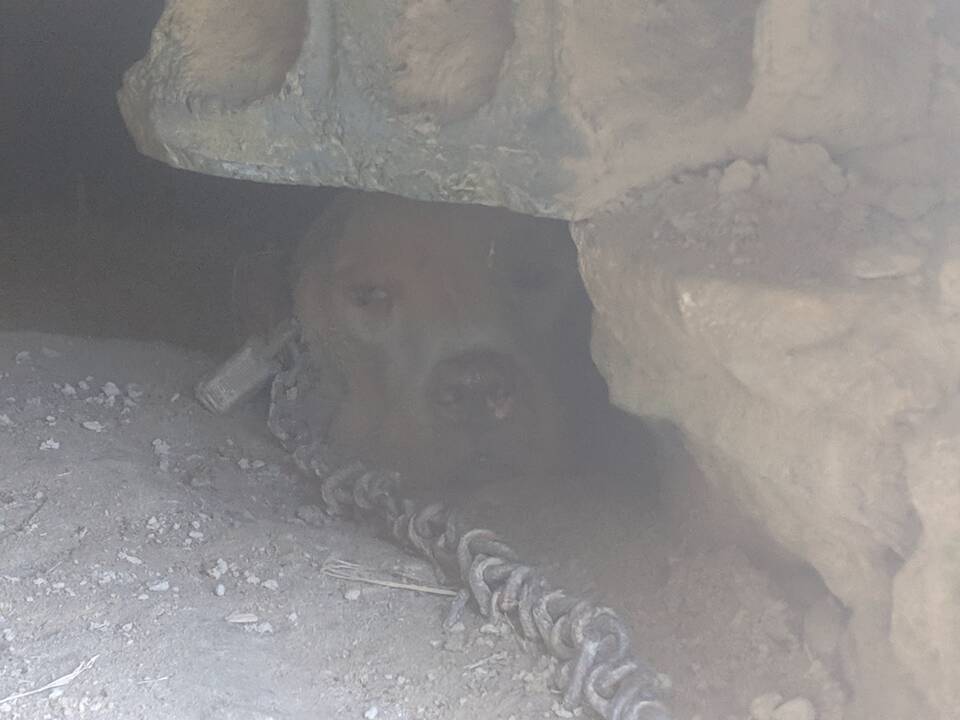 Moon seen under the shed.

Details of the case were shared with law-enforcement authorities. Fieldworkers also followed up with the owner, who had two other “outdoor dogs” and two dogs she allowed to live indoors, for a serious discussion. She agreed to surrender all animals remaining on her property and signed an agreement never to own animals again. Two of the dogs—including Buddy, who’d been kept in a filthy, muddy pen—were transferred to local shelter partners for adoption. 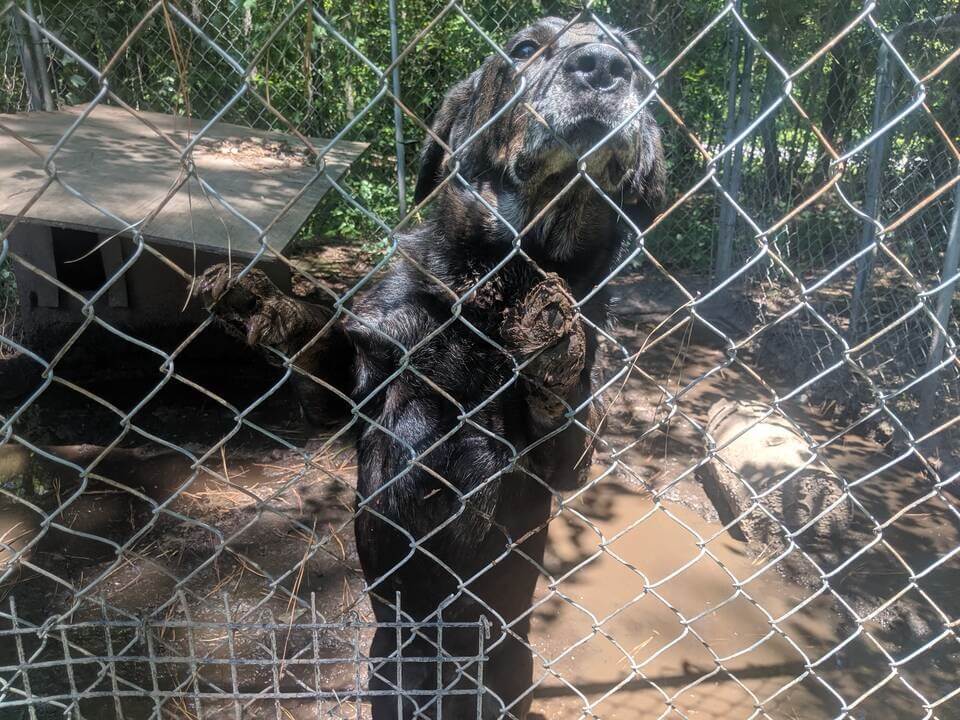 This often-tethered cat (yes, cat!) escaped and was likely hit by a car. Tao was in serious pain from a crushed pelvis and spine, yet his owner put him back outside on the tether. Thankfully, the owner eventually surrendered him for end-of-life help, and his suffering was ended. 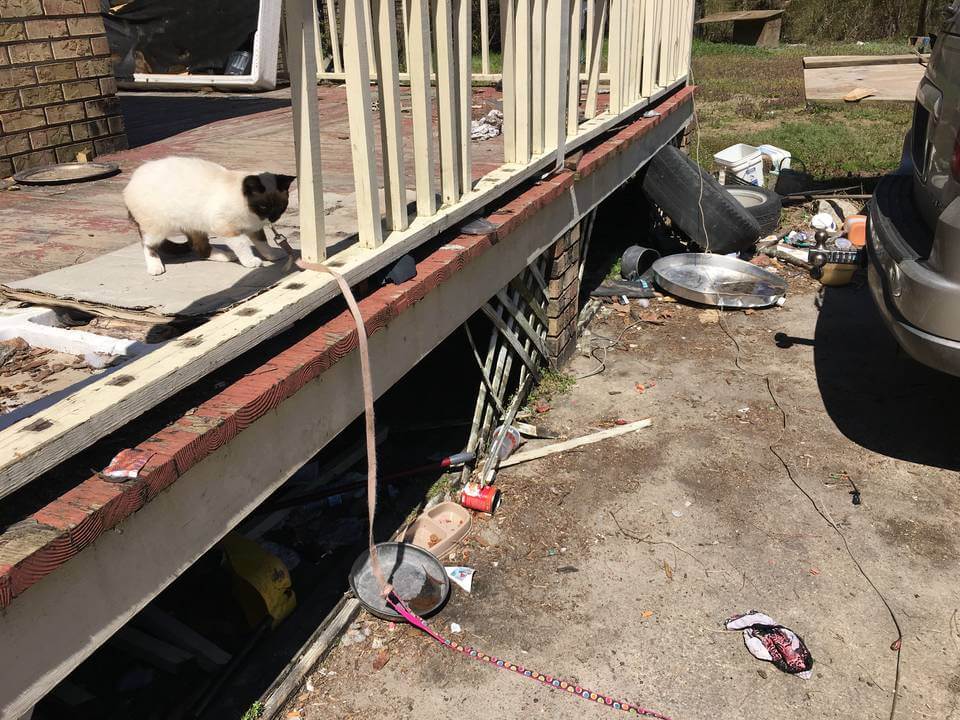 Homey the cat somehow managed to become stuck inside a wall behind a bathtub, where he remained for three days. His panicked guardian called PETA for help after animal control was unable to assist her. After much effort, including destroying some pipes, we were able to free Homey. We rushed him to a veterinarian to ensure that he was OK after not eating and drinking for so long. Aside from having a flea infestation and a minor skin infection, he got a clean bill of health. His guardian was very thankful for our help. 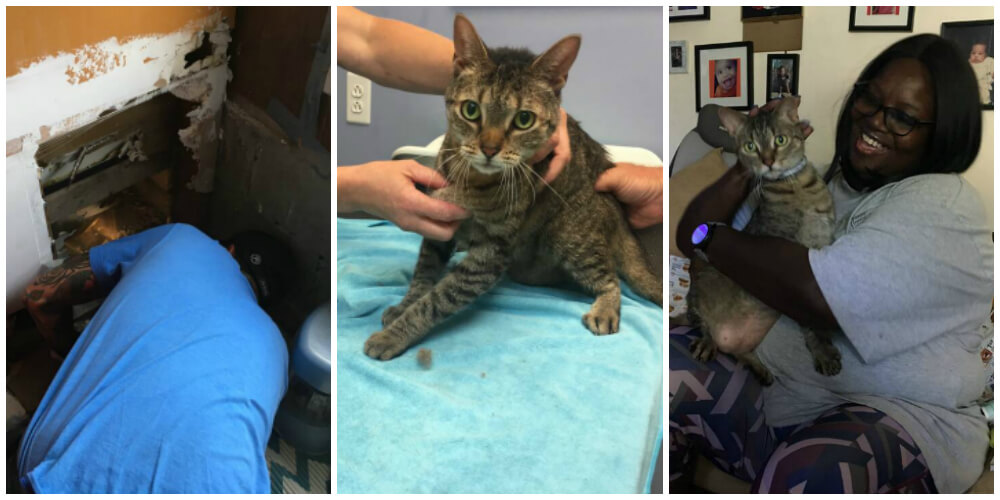 We mean it when we say our fieldworkers are committed to saving all animals. The family of an elderly man who’d recently suffered a stroke contacted PETA to see if we could help place these two sisters. We were able to find a home for the goats quickly and transport them there! 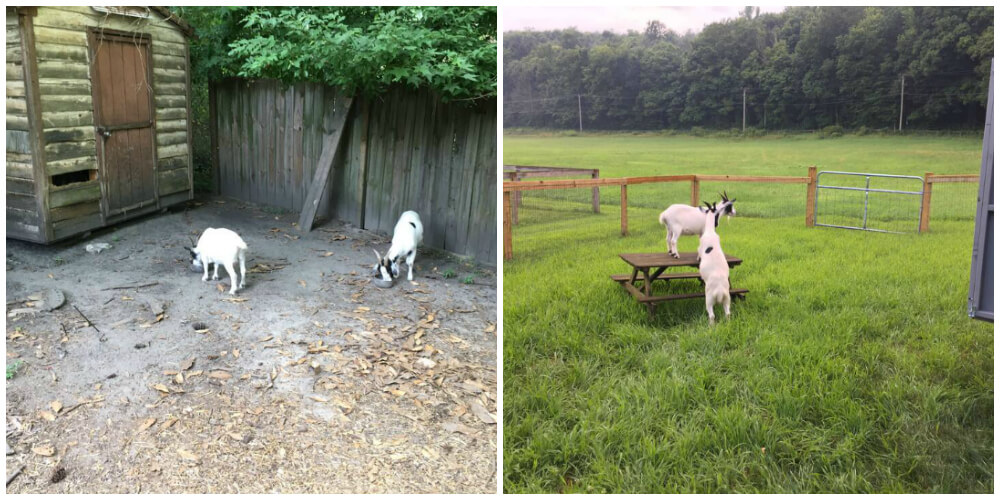 You, Too, Can Make a Difference for Animals

When you see animal abuse, please always try to stop it or at least report it. Remember: Adopt, don’t shop—and have your animal companions spayed or neutered. You could also volunteer at your local animal shelter or rescue center and ask local government officials how you can help get laws passed that would require animal-care standards and ban tethering, breeding, and the selling of animals in pet shops. Click below to learn more and take action.