There’s a new headstone in one of the plots adjoining Colonel Sanders’ grave in Louisville’s Cave Hill Cemetery. It’s inscribed with what our press release is calling a “moving tribute” to a “Kind Friend of Chickens.” I’ll refrain from commenting on the literary merits of the poem itself, but the fact that the bright red letters running down the left side of the poem spell “KFC Tortures Birds” is a piece of undeniable genius on the part of my friend Matt Prescott, who spearheads PETA’s Kentucky Fried Cruelty Campaign, and whose name is on the headstone. In addition to ensuring that when Matt’s time eventually comes, he’ll have a prime piece of real estate waiting for him in Louisville, this has garnered us some great coverage for our KFC Campaign, including a story in US News and World Report today.

Here’s what Matt had to say about the whole thing, and you can see a photo of the tombstone below:

“This headstone will remind visitors that KFC stands for cruelty and death. We’ll continue to pressure KFC executives to stop these grotesque abuses of billions of chickens—no matter how long it takes.” 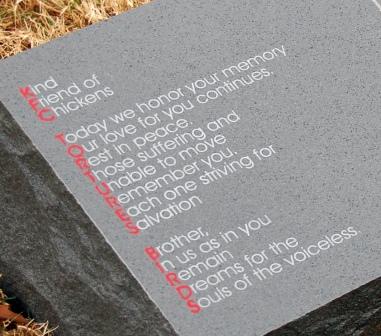 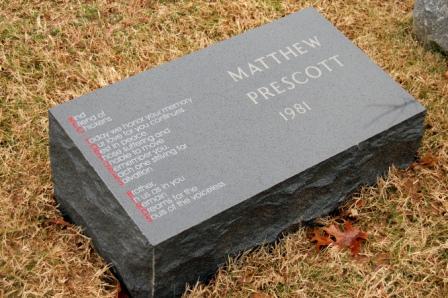