When he learned that Topsy, an elephant used by Piccadilly Circus, tested positive in two tuberculosis (TB) screening tests, Maine’s state veterinarian, Don Hoenig, barred the circus from taking her into the state. Since Piccadilly didn’t want its other elephant, Annette, to perform without Topsy, neither elephant will be forced to perform in Maine. 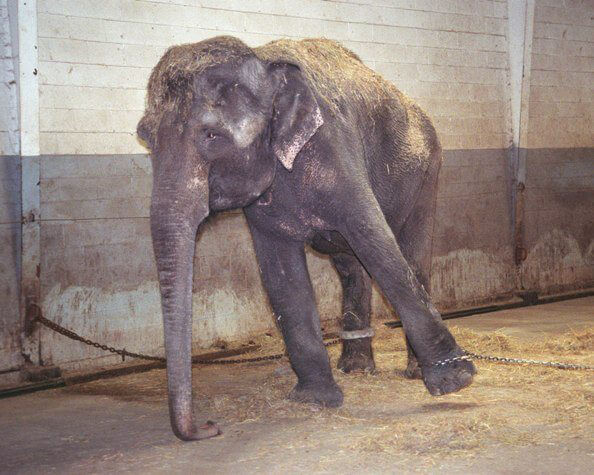 Hoenig is adhering to the 2012 Guidelines for the Control of Tuberculosis in Elephants recommended by the United States Animal Health Association (USAHA), which aims to prevent, control, and eliminate disease. The USAHA recommends that elephants who test positive for TB should be restricted from all travel or public contact for a year since the disease is highly transmissible to humans, even without direct contact. PETA has repeatedly urged state and local health departments to protect the public when circuses are in town by prohibiting the exhibition of elephants who have reactive TB screening tests.

Elephants used by circuses have a heightened risk of developing active TB infections because their health is compromised by the constant stress of traveling inside filthy, poorly ventilated boxcars. They are also chained for up to 100 hours at a time and forced to perform unnatural and sometimes painful tricks. Multiple elephants used by Ringling Bros. and George Carden Circus have tested positive in TB screening tests but are still being forced to travel and perform.

Because of the fragile health of TB-positive elephants and the risk to the public, PETA has repeatedly asked the U.S. Department of Agriculture (USDA) to make adherence to the USAHA guidelines a national requirement. The USDA even announced its intention to do so, but it has yet to act.

Please e-mail the USDA and ask it to protect elephants and the public from circus owners who sacrifice safety for profit.